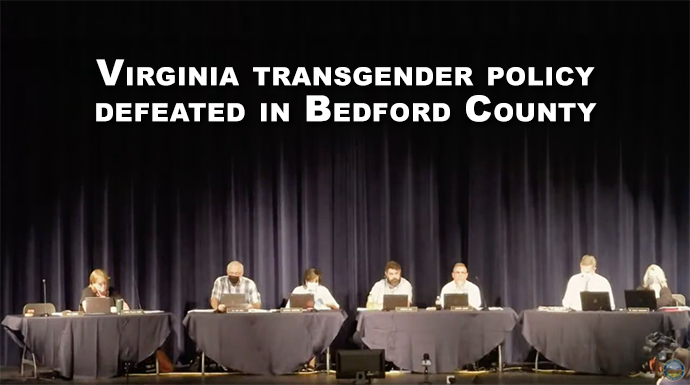 A lawsuit by Christian Action Network against the Virginia Department of Education reverberated loudly on July 29, with the Bedford County, Va. School Board voting to reject the department’s “guidelines” on transgender students in state public schools.

After discussion that sometimes grew raucous, School Board members voted 4-3 to reject the Virginia Department of Education’s model policies regarding transgender students.

“This is a great victory for Bedford County students, parents, teachers and school administrators,” said Martin Mawyer, president of Christian Action Network. “I am especially pleased that the lawsuit we filed earlier this year gave board members the ammunition they needed to reject these ungodly and unconstitutional policies.”

Many of the policies are listed here.

The lawsuit had already resulted in Warren County, Va. School Board members delaying adoption of the policies. It was dismissed for lack of standing by a circuit court judge in Lynchburg, Va. on July 27, but that judge unexpectedly went on to rule that the policies are mere suggestions and do not have the force of law.

Lynchburg Circuit Court Judge Frederick Watson also ruled that school boards will have standing to sue if state authorities tried to compel them into adopting the policies.

CAN was joined by the Founding Freedoms Law Center (FFLC) in the lawsuit.

“Though the judge did not grant CAN or FFLC standing in this case, the judge still ruled that schools are the ultimate decision-makers on whether to accept or reject Richmond’s unscientific, non-biological, discriminatory policies,” Mawyer said. “This was truly a remarkable win, not only for CAN and our plaintiffs, but for all common-sense parents in this part of southern Virginia.”