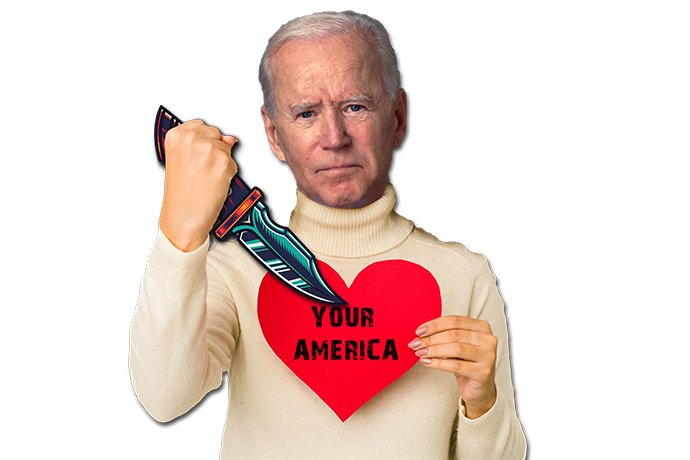 …but it’s not the America you or I love. That America he wants to get rid of, deface and shame.

What was so “harmful” and “offensive” about this commission, which was comprised of some of America’s most distinguished scholars and historians?

In other words, the commission gave reasons for Americans to love our nation’s glory, history and founding.

That’s not the America Biden loves, so the commission had to go.

Biden then went on to issue an executive order to ban the federal funding of private prisons.

Because putting minorities in jail is “destructive and costly. It costs every American,” he says, and it will make our nation “less prosperous…less successful…less secure.”

How does putting convicted criminals in prison make America less prosperous, successful and secure? Perhaps only Biden and his friends at Black Lives Matter know for sure. But what is clear, Biden says, is that private prisons show America is “morally deprived” and “corrosive.”

Sure, Biden loves America. His love reads like a Valentine Days card that depicts a dagger plunging straight through the hearts of patriotic Americans.

Now Führer Biden wants to go after Andrew Jackson and his portrait on the $20 bill.  Jackson has been targeted among leftist progressives in recent years as a racist over his treatment of Native Americans and his ownership of slaves.

Harriet Tubman, an American abolitionist, is favored by Biden to be the new face of the “double sawbuck,” replacing the seventh president of the United States.

Biden’s press secretary, Jen Psaki, was excited at the news. “It is important that our notes, our money, reflect the history and diversity of our country,” she said.

In other words, if you’re white you don’t belong on notes or money.  This is the America Biden loves.

It may not big deal either way (a former President’s face or a Republican-supporting abolitionist face) as fewer and fewer people pay with cash anyway.