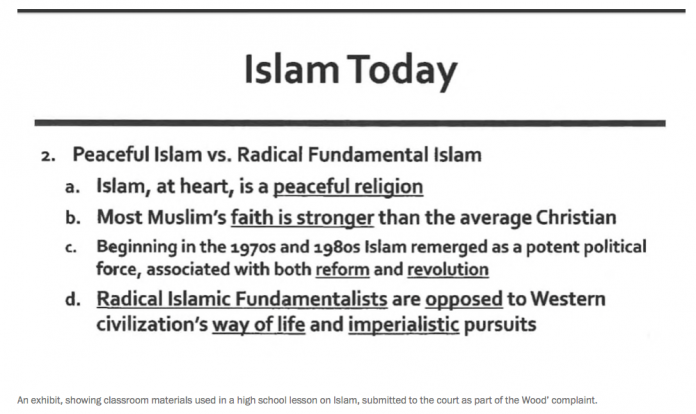 The Fourth Circuit Court of Appeals has upheld a lower court ruling today stating that an Islamic indoctrination program being taught at La Plata High School in Maryland is constitutional.

Caleigh Wood and her parents John and Melissa brought the case after Caleigh was given classroom assignments during the 2014-15 school year that they felt violated her First Amendment rights under both the Establishment and Free Speech Clause.

Among the work assignments Caleigh was asked to complete was a statement that read: “Most Muslim’s (sic) faith is stronger than the average Christian.”

The eleventh-grade student was also asked to complete the Islamic creed of faith, “There is no god but Allah and Muhammad is the messenger of Allah.”

The Thomas More Law Center argued the case on behalf of the Wood family and Christian Action Network filed a supporting “friend-of-the-court” brief.

In finding the classroom material constitutional, the 4th-Circuit ruled the assignments served a “secular purpose,” essentially agreeing with a lower court ruling that said the instruction was “purely academic.”

“This is precisely the sort of academic exercise that the Supreme Court has indicated would not run afoul of the Establishment Clause,” the 4thCircuit wrote.

Last year, the same appellate court ruled that the display of a cross on public land was unconstitutional.

“This is an exercise of astounding hypocrisy,” said Martin Mawyer, president of Christian Action Network.

“According to this court, it’s unconstitutional to have a cross on public land if it may offend a small number of atheist citizens who drive past it. But if a student is forced to learn the Five Pillars of Islamic faith, declare that Muslims have a stronger faith than most Christians and told to complete the Islamic creed of faith, this is nothing more than an exercise that serves ‘a secular purpose.’”

“The court’s animosity toward Christianity could not be more obvious and conceited,” Mawyer said.