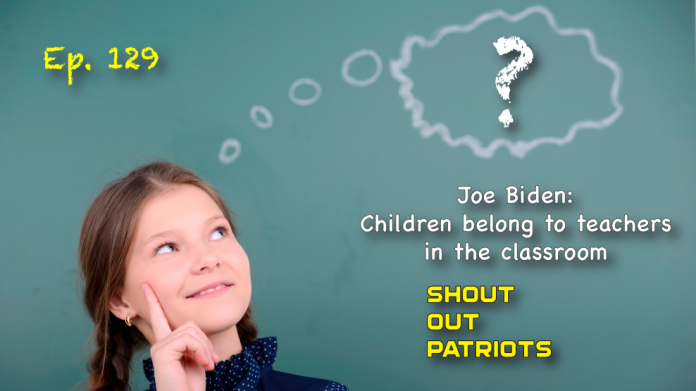 ​Biden Claims Children Belong to Teachers While in the Classroom​

Perhaps more surprising than Joe Biden’s claim that children belong to teachers while in the classroom was the very little news attention given this absurd statement.

If you missed it, on April 27, Joe Biden spoke to educators at the 2022 Teacher of the Year ceremony when he addressed the issue of who children belong to while at school.

“They are not somebody else’s children. They’re like, yours when they’re in the classroom,” he told teachers.

First, it’s an outrage that he referred to parents as being nothing more than “somebody else’s children.”

Is the new woke label now being given to parents?

We shouldn’t be surprised.

The woke left is forever coming up with new and confounding ways to dehumanize human beings: ‘Birthing people’ are mothers, ‘people who bleed’ are menstruating women, and ‘chestfeeding’ is breastfeeding.

Oh, and did you hear that Michelle Obama sent out a message referring to women as “womxn” on Monday?

It should come as no surprise that Joe Biden wants to replace the word “parent” with the impertinent phrase, “somebody else’s children.”

But more importantly than this battle over words is the idea that mothers and fathers forfeit their parental rights while their children are in the classroom.

We all know why Biden wants to transfer children into the sole authoritative care of teachers. And it’s not so teachers can teach basic math, reading, history, or English lessons without parents getting in their way.

It’s so they can use these lesson plans to indoctrinate children into racism and gender-bending ideology.

This view is best summed up by quoting Tim Nordin, the school board president of Eau Claire School District in Wisconsin.

“Remember, parents are not entitled to know their kid’s identities. That knowledge must be earned.”

What a display of complete arrogance and disrespect for parents!

This is nonsense and explains why some school administrators want to reduce parents to “somebody else’s children.”

Yes, a crowd of teachers (supported by Joe Biden) believe THEY are the ultimate caretakers of children because schools cannot trust parents.

A teacher at Henley Middle School in Charlottesville, VA, expressed a similar view. When a mother objected to the school’s “anti-racism” policy that was causing her mixed-race son to think he had no future in America because of white privilege, a teacher told her this:

“I was told parents aren’t parenting anymore, and they need to take over,” Melissa Riley said in the New York Post.

In this episode of Shout Out Patriots, we discuss the many cases around the nation where teachers are aggressively taunting students with their twisted views on sexuality, race theory, and NSFW “entertainment.”

From drag queen shows to having children snitch on their parents to putting menstrual vending machines in boys’ bathrooms, we examine the real reasons why Biden wants kids to belong to teachers rather than parents.

Remember, for the best listening or viewing experience be sure to download the episode.

Patriots. They Deserve a Voice. So, we Give it to Them!

Subscribe on Apple Podcast or Spotify and don’t miss an episode.

It‘s time for Christians to dig up an old commandment and...