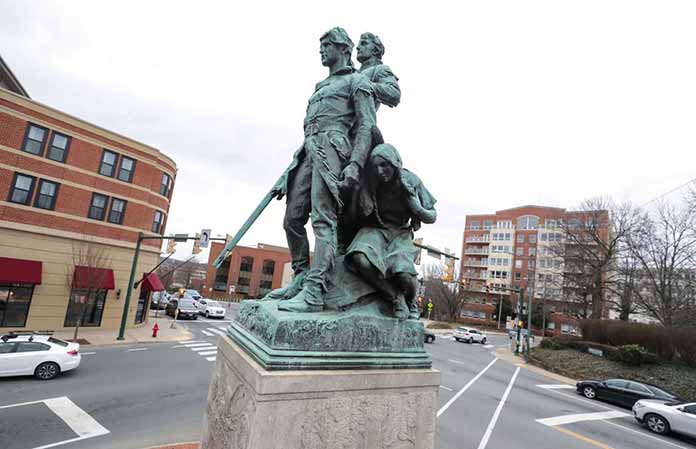 Much as the Taliban and ISIS destroyed statues and historic sites in Iraq and Syria, blowing them up with dynamite and flattening them with bulldozers for being spiritually impure, American leftists are hard at work wiping out what they see as distasteful American history and landmarks.

The latest casualty will be Charlottesville, Va.’s statue of explorers Meriwether Lewis and William Clark, because the male figures appear to be sheltering and towering over their legendary helper, Sacagawea. Charlottesville City Council is moving forward on a plan to remove the statue on West Main Street, near the Downtown Mall.

According to WHSV, Representatives from the Shoshone Tribe met with city leaders for a work session last week. Councilors heard from descendants of Sacagawea over what to do with the statue.

“This morning, I went out there to look at that statue. It did not make me feel good at all,” said Emma George, who calls herself a descendant of Sacagawea.

Two Native American tribes have argued that the statue is inaccurate, offensive to them, and should be removed.

“Native people in Virginia need no longer to be invisible. Once this image is removed, and once it is out of sight, it will bring a growth to people,” descendant Ann Abrahamson said.

“We’ve been out of balance in this community for a long time. We’re usually having that conversation just in terms of black and white, but that imbalance started way before the discussion that we’re usually talking about,” Charlottesville Mayor Nikuyah Walker said.

The council was weighing several options, but decided to remove the statue from the street entirely. Councilors voted 4-0, with councilor Mike Signer not present.

“You have to be bold and audacious, and it may be very uncomfortable,” Walker said.

City Hall staff will come up with a plan for removal of the statue, as well as get cost estimates.

Councilors are expected to talk about this issue again at their meeting Monday, November 18. They have also been discussing possibly ending the city’s celebration of Thomas Jefferson’s birthday as a city holiday.