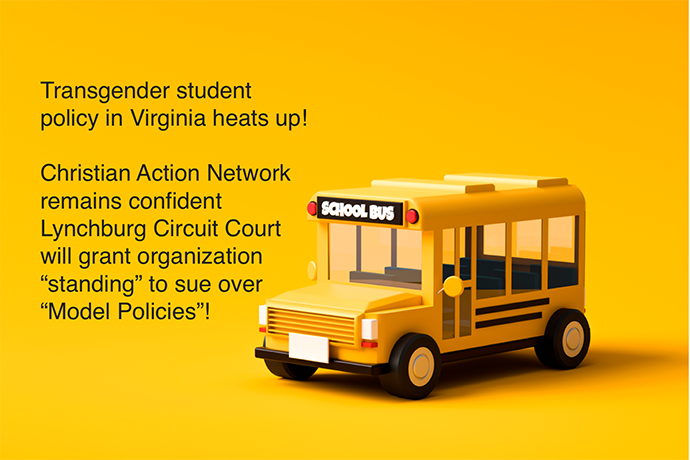 The Christian Action Network has filed an opposing motion with the Circuit Court of Lynchburg to reject the Virginia Department of Education’s efforts to dismiss the organization’s lawsuit opposing the state’s “Model Policies for the treatment of transgender students in the public schools.”

On May 18, 2021 the VDOE told the Lynchburg Circuit Court that neither Christian Action Network nor its plaintiffs or their children have standing to sue over the controversial “Model Policies” that are scheduled to be implemented at the beginning of the 2021-2022 school year.

“As the statute provides a standard for standing…Appellant’s Petition should be dismissed,” attorneys for the VDOE instructed the court.

The focus of the VDOE’s argument was that CAN, its plaintiffs and their children have not yet suffered any “burdens” under the proposed policies and therefore have no “standing” to sue.

Attorneys for CAN responded that the organization, as well as its plaintiffs and their children, all have standing to sue for multiple reasons, primarily because Virginia law grants “standing” to anyone who provided legal arguments against the “Model Policies” during the comment period which ran from January 4 to February 4, 2021.
Virginia law states, “Any person who remains aggrieved after the effective date of the final guidance document may avail himself of the remedies articulated in Article 5 § 2.2-4025 et. seq.).”

CAN and its plaintiffs wrote public comments on the forum and presented legal arguments against the policies, which were never addressed as required by state law.
David Carroll, lead attorney for CAN, wrote the court, “Va. Code § 2.2-4002.1 creates a special kind of standing by allowing members of the public to participate in the adoption of guidance documents by commenting.”

“In addition or in the alternative, Virginia recognizes that a party is aggrieved
when the person has ‘some direct interest in the subject matter of the proceeding that
he seeks to attack,’” Carroll wrote.

Failure to remedy these issues, CAN told the court, “are likely to cause immediate, unavoidable and irreparable injury to the general population of students and teachers.”