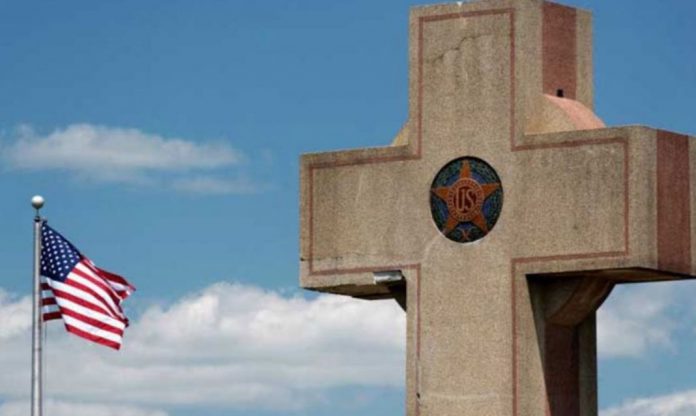 A memorial to 49 soldiers of World War I is on the block for possible destruction in the name of separation of church and state, but it stands tall in the hearts of Bladensburg, Maryland residents, for now.

Ask them about their town’s famous monument, the Peace Cross, one would not be able to tell that it has become the subject of controversy. It still stands, for now, and according to the American Legion that built it nearly 100 years ago, they will host a Memorial Day ceremony there at 11 a.m., Monday.

Last Sunday as I visited the area I had the opportunity to talk to local residents about it. Not surprisingly, most expressed respect and even love for the 40-foot-high memorial and reminder that our freedom is never free. Some tell others about it as a point of reference.

Most know that it stands for the sacrifice of the 49 men of Prince George’s County who gave their lives fighting World War I, and the names of the deceased are included on a large metal plaque there.

It was difficult to find anyone who disliked the memorial.

“I am a veteran myself, and I love it being there,” said Ron Carpenter, who was shopping Sunday at one of the commercial areas that flank every approach to the site. “It has been there for years, and I love seeing it. Every time I refer to this area, that’s what I will tell them about first. I hope I will be able to tell my grandkids about it, and I hope they will be able to see it.”

Brian Kent, 26, working at the nearby pizza restaurant, said he believes that what the Peace Cross stands for is important. “I have no issues with it, and I know that it represents the area,” he said. “It has been there all my life, and now I walk by it every day I walk to work.”

Discussions at the shops in the area included some agreeing that its venerable standing makes it difficult to imagine it being taken away, gone, or reconfigured into something else.

The public-funding issue caused one man to ask if symbols of other religions would be as welcome, if a local government paid for its care. Most agreed that for veterans of other faiths, they would be.

The Peace Cross was constructed through private donations and placed on private land that the county later purchased in order to develop a traffic interchange around it, combining Bladensburg Road, Baltimore Avenue and Annapolis Road.

The county promised to maintain the small plot that developed to include lighting and seasonal floral landscaping features. That generations-old agreement is at the heart of a lawsuit naming two atheists who testify that they are offended by the thought that government dollars help beautify a cross display.

But the landscaping work would continue regardless of if the cross was removed, or if the arms of the cross were broken off so a couple atheists can drive by without being offended.

One man, also a veteran, visibly cringed when hearing that defacing the cross that way was an option. Some details of the case are not generally known to local townspeople.

Roger Reyes, while shopping at a local auto parts store to the north, said that there should be a priority for preserving history. “This is a part of history,” he said. “It’s like a sign that people can see and know what happened. I think it is important for people to learn.”

One emerged during discussions at the auto parts store, who said he would like the cross gone: he didn’t want any of the old structures in the area around anymore.

“To me, I think they should put some nice new things up around here,” Meke John said. “There’s too much junk-yard old stuff. It’s a park area, but it’s not really attractive.”