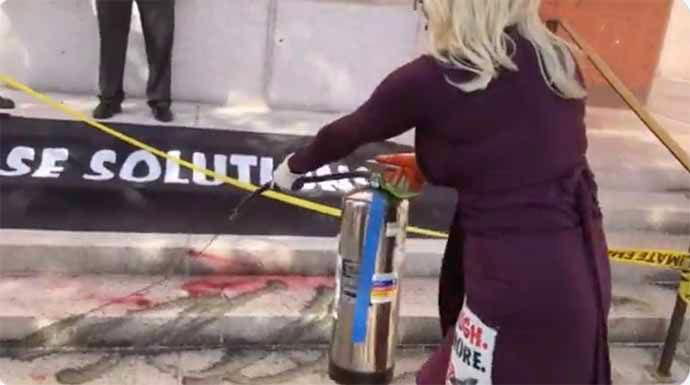 A deafening silence is coming from Democrats after dozens of climate activists were arrested after clashing with police in Washington D.C., where they forced their way into the Interior Department building in a scene strongly reminiscent of the storming of the U.S. Capitol building on Jan. 6, 2021.

Will the FBI be visiting their homes and arresting 500 people? Will Facebook provide law
enforcement with their social media posts and pictures from the event? Will any social media or tech company divulge the geolocation information from the demonstrators’ phones?

Will they be called “terrorists” in Congress?

Will tall black fences and barricades be erected around the Interior Department?

Will the National Guard be called in?

An Interior Department spokeswoman did say that a group of demonstrators stormed the lobby of the building on Oct. 14, injuring multiple security officers, at least of one whom had to be hospitalized, according to DailyMail.com.

The violence in fact seemed to surpass that of Jan. 6, with police using Tasers and batons
against several protesters, representatives for the activists said.

This despite the fact that the group numbered about 55 people. The Jan. 6 crowd numbered in the hundreds of thousands, packing Pennsylvania Avenue and the Eastern end of the National Mall.

“Multiple injuries were sustained by security personnel, and one officer has been transported to a nearby hospital,” said Interior Department spokeswoman Melissa Schwartz.

The Interior Department riot/attack/insurrection was the work of a Native American climate
group calling itself “People vs Fossil Fuels,” which wants approvals for fossil fuel infrastructure to be suspended, though there were also shouts to defund the police.

Video clips of the incident show an overwhelmed officer flashing his Taser at the angry crowd at the entrance to the federal building.

“We will no longer allow the U.S. government to separate us from our relationship to the sacred knowledge of Mother Earth and all who depend on her […] We will not back down until our natural balance is restored,” they wrote.

Another video shows a protester trying to climb into the building through a door while the crowd cheers in support.

“Political violence and attacks on government buildings are flat-out wrong no matter who is perpetrating them or what they claim to believe,” Senate Majority Leader MitchMcConnell said. “That’s why it’s puzzling that last week’s incident attracted so little attention and condemnation.”

This was the act that got an unarmed female supporter of President Donald Trump shot to death in the Capitol Building.