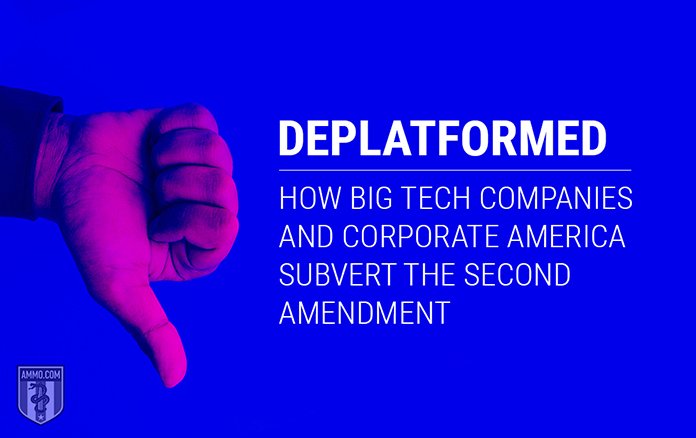 Regardless of one’s religious faith or lack thereof, there is an illustrative case in this biblical story: When one cannot buy or sell, one is metaphorically up the creek. Short of producing everything one needs oneself, buying and selling are necessary parts of virtually every modern person’s life.

In our modern world, we can begin to see a sort of Mark of the Beast: While ideas and even objects aren’t banned, they are increasingly difficult to come by, not due to government fiat, but due to the machinations of corporations hostile to the American values of freedom.

One can be in favor of the free market while recognizing a simple truth: There is no way that America’s Founding Fathers would have sat on their hands while five corporations dominated American discourse and commerce. It is hard to imagine, for example, the Founders suffering a single private bank processing most of the payments in the United States and refusing to do business with gun merchants. Alternately, one can scarcely imagine that the Founders would have sat still for three companies – all of them hostile toward American values and the Constitution – dominating political discourse and deplatforming anyone who opposed them.

This is the situation in which we find ourselves as a nation today: Guns are not illegal, but private companies will make it increasingly difficult to buy, sell or own them – up to and including pulling your bank account. You have all the freedom of speech you like, but prepare to be deplatformed or have your voice buried by large tech corporations with their thumb on the scale of American discourse.

As the American economy has become more corporatist – such that the market is controlled by the interrelation between monolithic mega-corporations, Wall Street and the state – and less capitalistic and dynamic, the American press and economy are now being dominated by forces hostile toward the American public and American values.