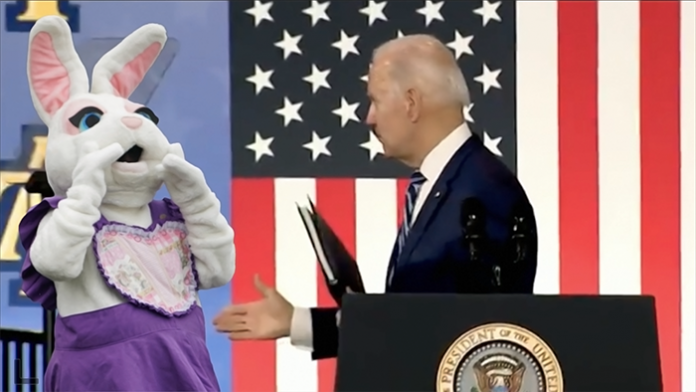 ​We have the answer to that mysterious Biden handshake​

No matter how many times I watch Joe Biden reach out his palm to an invisible person after his speech at A&T University in Greensboro, NC, I can’t help but conclude he wanted to shake the hands of an apparition.

Several days later, and just as perplexing, was the horror seen on Joe Biden’s face when he was confronted by a costumed Easter Bunny who came to drag him away from a reporter during the White House Easter Egg Competition.

I had witnessed similar bizarre behavior in the past as my mother was suffering from dementia before she passed a few years ago.

My mother would see things, believe things, and tell stories that would leave any listener completely speechless.

Once, she took her teddy bear from her apartment and put it on a bench next to a hallway elevator. When asked why the cute furry animal had to be banished, she said it was because the teddy bear was fighting with her favorite stuffed dog.

There was no way of convincing her that she was either hallucinating or having a dream so vivid she thought it was real.

The whole experience of watching her decline was tragic, both for me and for all those who loved her.

When I watch Joe Biden utter nonsense words, tell stories that never happened, or see him wander about aimlessly searching for an apparition, I see my mother in the later stages of her life with dementia.

No one has the right to blame, criticize or demean a person suffering from this terrible sickness.

But equally as valid is that no one in their right mind would elevate such a person to be in charge of the most powerful country in the world.

During this Shout Out Patriots podcast, we examine whether Biden hallucinated when he tried to shake hands with a specter and, if so, what that may mean to the country.

If you have Netflix, I encourage you to look at a series called “Unauthorized Living.” The show is about a mobster who suffers from the early stages of dementia, which has striking parallels to what we are now witnessing with Joe Biden.

It’s creepy to watch this mobster, named Nemo Bandeira, try to maintain an outward appearance of normalcy while his brain is slowly rotting away. As his disease worsens, he has to use cue cards (not unlike Biden) to remember what he should say, where he should be, and what he should be doing.

On the lighter side of things, this episode of Shout Out Patriots has some humorous video clips of Biden you don’t want to miss! They’ll leave you in stitches.

Patriots. They deserve a voice. So, we’re giving it to them!

The trials and tribulations of making a faith-based film