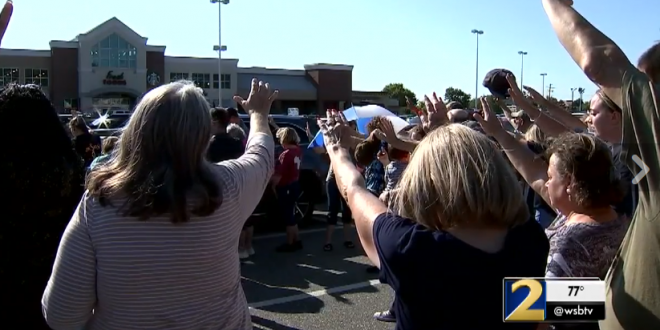 Bartow County, Ga. – Nearly 100 people showed up to a prayer vigil in support of “Ms. Barbara” who was told not to pray at work.

Ms. Barbara works at an Ingles store in Cartersville as a cashier.  Though she declined to comment to local reporters, her supporters say management asked her to stop praying after a customer complained.  Management also complained that her prayers were causing long lines.

For years Ms. Barbara has prayed for her customers as she checks them out.

“There are people who come in here who don’t buy a thing. They just go through Ms. Barbara’s line hoping she’ll pray for them,” Rogers said. “It’s a sad day.”

Many of the protesters told local news they count on Ms. Barbara and her prayers.

“She’ll hand you a receipt, lightly touch your hands and say, ‘I’ll pray for you,'” Rogers said.

WSB-TV said they received “no formal response” from Ingles headquarters regarding the matter.

Church threatened with arson and lynching over Coronavirus spread