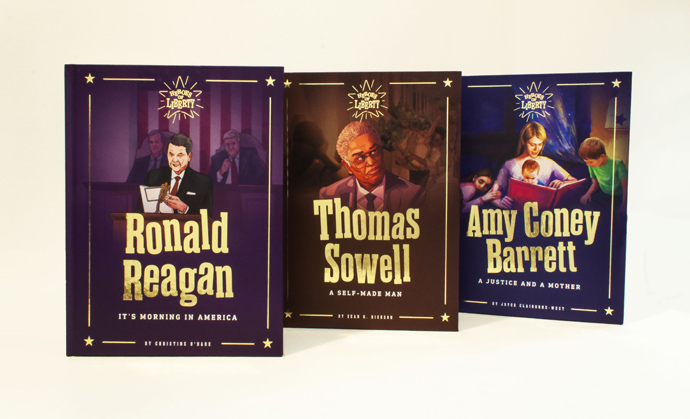 The childlike intellects who manage Facebook actually shut down the account of a children’s-book publisher because it dared market books about people who promote freedom, wisdom, hard work, individualism and racial harmony.

The account has since been restored, in a fast-moving series of events, but not before a bright light was shone on the hypocrisy of both the publishing and Big-Tech worlds.

Booksellers like Barnes & Noble, along with smaller retailers, have children’s sections literally crammed with leftist-indoctrination children’s books like Woke Baby, Feminist Baby and The Little Book of Little Activists, along with children’s biographies of media-worshipped leftists like Alexandria Ocasio-Cortez, Oprah Winfrey, the Obamas and Ruth Bader-Ginsburg.

The publisher also uses Facebook to promote its products to followers, however, and found on Dec. 23 that Meta, the newly renamed company that owns Facebook, had shut down its ad accounts because it was posting “Low Quality or Disruptive Content.”

It seems that other, more liberal Facebook users, ever on the lookout for “dangerous” ideas to exclude, cancel and be prejudiced against, flagged Heroes of Liberty’s posts and got them kicked off Facebook.

Heroes of Liberty appealed the ruling, which only made Meta permanently disable the account, declaring: “After a final review of this ad account, we confirmed it didn’t comply with our Advertising Policies or other standards. You can no longer advertise with this ad account and its ads and assets will remain disabled. This is our final decision.”

However, Meta has now mysteriously reinstated the ad account, as of Jan 3.

“I wanted to let you know that the ads account was disabled in error and has been restored,” said Drew Pusateri, a spokesperson for Meta, to FOX Business on Jan. 3.

Heroes of Liberty editor and co-founder Bethany Mandel said the way the reversal was accomplished was quite strange.

“They proactively reached out to several members of Congress and told them it was a mistake and we’re back online. Those offices told us,” said Mandel. “They didn’t reach out to us.”

“We are not in politics, we are in the business of creating beautiful stories about great people that will entertain children and give them life lessons,” Mandel went on, to FOX. “To cancel children’s books because they celebrate American values that 90 percent of Americans believe in isn’t even anti-conservative bias, it’s anti-American. Pure madness.”

In editorial published Jan. 3 in the New York Post, before Meta reversed itself, Mandel wrote:

Book banning and burning have been a popular strategy among authoritarians for hundreds of years. Authoritarians know that controlling the written word and ideologically capturing a generation is the best way to ideologically brainwash a society. Over the course of the last decade, we’ve seen how woke ideologues have taken over the publishing industry and Big Tech, trying to influence a future generation of Americans with radical content.