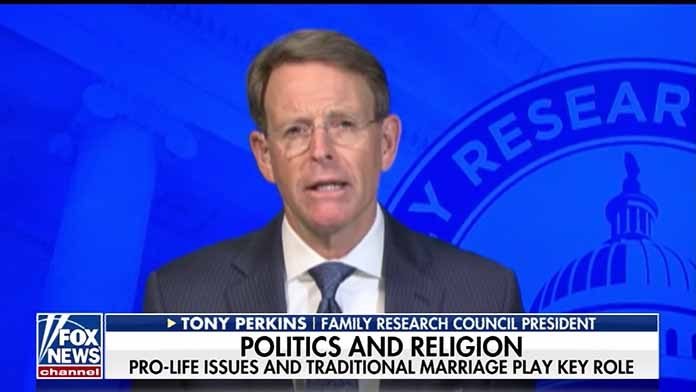 A Fox News guest on Sunday blamed America’s rising gun violence on the decline of Christianity after a mass shooting in West Texas left at least seven dead and 22 others injured this weekend.

The deadly massacre, which began at a traffic stop between Odessa and Midland on Saturday afternoon, has intensified pressure on GOP lawmakers to enact stricter gun control measures. The attack came just weeks after a gunman opened fire in Dayton, Ohio, killing nine with an assault weapon and another stormed a Walmart in El Paso, Texas, leaving 22 dead and dozens more injured.

“It’s tragic and at some point we have to realize we have a problem as a nation, and the problem is not the absence of laws. It’s an absence of morality,” Perkins said, “[which is] really the result of a decades-long march through the institutions of America, driving religion and God from the public square.”

“What do we need to do as a country?” the show’s host asked Perkins.

“I’m willing to sit down with the left who say, ‘I don’t want to hear anymore about your prayers,'” the former police officer replied. “Well, I agree. Praying alone is not enough, it’s time to act. It’s not just about having a conversation about restricting those who should not have guns — criminals — but it’s also a discussion of the absence of a moral core in our culture today.”