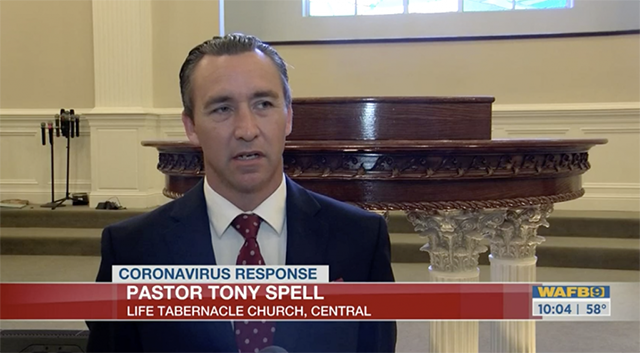 The media are excited today. They are gleeful. They can now report that an elderly parishioner of Tony Spell’s church has died from complications of coronavirus.

Dozens upon dozens of news outlets immediately pounced on the April 15 death of Harold Orillion, 78, who succumbed to “acute respiratory distress syndrome” possibly linked to coronavirus.

The reason the mainstream media are so happy is that the Rev. Spell leads the Life Tabernacle Church near Baton Rouge, La., and has been a vocal opponent the state’s lockdown orders that include religious gatherings.

There is no direct evidence Mr. Orillion contracted the disease from attending the Life Tabernacle Church, or even that he attended the church in the past couple of months, or even that he actually died from the virus that has been gripping the world, but the media were bursting with joy today at his death.

The fact that his unfortunate ending is now the front-page top story with so many news outlets shows the extent of the media’s amusement and delight.

But let’s flip the coin for just a moment. Let’s expose the towering hypocrisy of the media.

On April 3, a Broward County, Fla. sheriff’s deputy unfortunately died from a VERIFIED case of coronavirus. The deputy’s name was Shannon Bennett.

Immediately after his death, Police Chief Dale Engle in nearby Davie, Fla. reportedly linked the deputy’s death to his attendance at a massive gay pride event in Miami in early March.

It has been alleged that Chief Engle suggested that Deputy Bennett died because he was a “homosexual who attended homosexual events.”

Not only did the media go BERSERK when Chief Engle made his outspoken, very politically incorrect, “homophobic” claim, but Engle was immediately SUSPENDED from his leadership post after news stories spread nationwide. The police chief now sits at home while the matter is under investigation.

The hypocrisy is flagrant and extreme.

Chief Engle was suspended because he was “insensitive” and dared to “belittle” Deputy Bennett’s death after Bennett attended the mass homosexual social event, where participants were recorded kissing, embracing and engaging in dirty-dancing, simulated sex.

Organizers of the Miami gay festival have actually issued press releases admitting that several attendees not only contracted coronavirus from the event, but that some had died as a result. That of course is dismissed and swept under the rug by those who claim to report the news.

So what does this have to do with the unfortunate Mr. Orillion?

Mr. Orillion was a Christian who died as a possible result of attending a church service. This made his pastor fair game for the media, who ramped up their liberal, anti-Christian hatred and treated the pastor, his congregants and the victim as reckless religious nuts who endangered lives with their radical, extreme Christian beliefs.

Going to a worship service while a virus is loose? Extremism that is heedless of everyone’s safety, according to the media.

But … going to a homosexual soiree while a virus is loose? Don’t you dare judge them!

For the majority of the world, the passing of parishioner Harold Orillion is barely relevant. They did not know him. They would not recognize his face on the street.  He was anonymous. He was like a character out of the Bob Fosse’s musical Chicago: He was Mr. Cellophane Man.  He was invisible.

His name, his identity, his face were obscure … until the media latched onto a narrative that they hope will advance their cause of mocking, denigrating and falsely accusing Christianity of something it never did or caused.