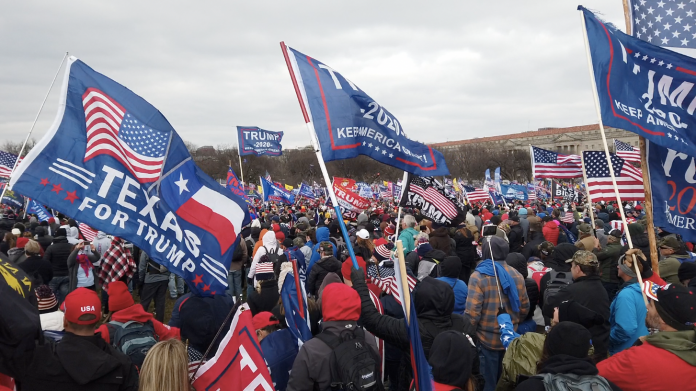 According to lawyers for the more prominent of the Jan. 6 U.S. Capitol protesters, these individuals are helping the Biden administration to fulfill its wildest war-on-white-supremacist-terror fantasies and being treated like jihadis at the infamous Guantanamo Bay.

An attorney representing one of the protestors told DailyMail.com that the Washington D.C. Jail, where dozens of the Capitol demonstrators are being housed before their trials is like the infamous lockup at the U.S. Navy base in Cuba.

Suspects are being placed in solitary confinement cells the “size of a walk-in closet” for up to 24 hours at a time and abused by jail guards, lawyer Joseph McBride said.

While media outlets persistently say law enforcement officers were injured and killed during the Jan. 6 violence, the only death from outright violence in the incident was a female Trump supporter and veteran who was fatally shot by police.

McBride is the lawyer for Richard “Bigo” Barnett, 60, of Arkansas, who let himself be photographed putting his feet up on Speaker Nancy Pelosi’s desk. The lawyer claimed that guards are “roughing up” imprisoned demonstrators to show solidarity with law enforcement who protected the Capitol and lawmakers inside as they certified a corruption-riddled election.

“In the eyes of the Federal Government, the 2021 Trump supporter is the 2001 religious Muslim,” McBride told DailyMail.com. “This is demonstrated by the fact that Trump Supporters, type casted as extremists, are being illegally detained pretrial by the United States Government.”

High-level prosecutors are also being brought in from around the country to try cases against the alleged “terrorists” who gathered to protest election fraud on Jan. 6 riot at the U.S. Capitol, according to a Daily Wire review of court records.

The U.S. Attorney for Washington, D.C. has summoned prosecutors from unrelated areas of its office, including the Violent Crime Narcotics Trafficking Section, Homicide Section, Asset Forfeiture and Money Laundering Section, Sex Offense and Domestic Violence Section, and Major Crimes Section, all to punch up the narrative that those who oppose unfettered election-rigging are dangerous terrorists.