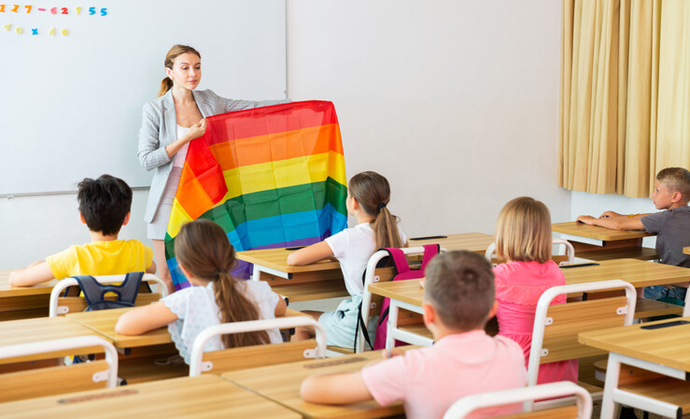 If a recent teachers’ conference about LGBT issues in the classroom is any guide, a good portion of the teaching trade is now devoted to actually helping students be homosexual.

Audio files gathered at conference of California’s largest teachers union – and reported on by the Epoch Times – revealed talk about recruiting young children to school gay clubs and various strategies to separate children from their parents’ influence. Also discussed were ways to keep children’s involvement in gay organizations secret from their parents and guardians.

According to the sound clips, the sold-out October conference in Palm Springs included information about targeting kids as young as 11 for invitations to LGBTQ clubs, based on snooping in the children’s internet searches. Search histories showing signs of interest in LGBTQ activity were discussed as an entry point to targeting children for recruitment and the active encouragement of other teachers to do the same.

Also discussed were ways to conceal children’s indoctrination into gayness, such as changing the names of homosexual organizations. The Gay Straight Alliance Club, for example, would become the less specific and explicit “Equity Club.”

One particular teacher reportedly discouraged the keeping of a membership roster for the clubs. This was so teachers could plead ignorance if a parent ever asked to see where their child’s name appeared.

A pair of teachers led a forum about “How we run a ‘GSA’ (Gay-Straight Alliance club) in Conservative Communities,” and talked about strategies for building up membership and retention for gay clubs.

The entire focus of the even appeared to be targeting children as a way to spread and establish the gay lifestyle for a new generation.

Now that word about the content of the conference has gotten out, at least one California district has sent out an email with a list of new guidelines around student clubs. The Spreckels Union School District policy says it has taken “immediate steps” to address concerns, and that clubs must submit an outline of all activities and materials before meeting, keep student sign-in sheets and require parent/guardian permission for club participation. Teachers are also prohibited from monitoring students’ online activity “for any non-academic purposes.”