No. They’re not a part of the NYPD, though they certainly look like it.

The new Muslim Community Patrol cars seen driving through parts of Staten Island and Brooklyn have all the hallmarks of an NYPD police car – with identical car model and similar decals and artwork – but they are not an official branch of New York’s Finest.

So who are they?

Ostensibly, they are a group of Muslim Community Patrol “officers” who are on the lookout for abused Muslims who are too afraid to talk directly to the NYPD.

“It is extremely important for every community to have their own community patrol because the community has its own culture, its own language, it has its own lingo, its own vibes,” Rabah said.

But is any of this true, that the MCP is a nothing but an altruistic buffer between the Muslim community and the NYPD?

Not according to the NYPD.

“This is not an NYPD vehicle,” Sergeant Jessica McRorie told PJ Media.  “The NYPD did not outfit or label this vehicle. This group is not officially sanctioned by the NYPD.”

In fact, the MCP doesn’t have ANY working relationship with the NYPD, which they are trying so hard to emulate and imitate.

(If you’re trying to ally the fears of Muslims who don’t want to talk to the NYPD, then why try so hard to look like them?)

Not surprisingly, the Internet is now filled with blogs and stories that the MCP is really nothing more than Muslim sharia units on the lookout for anyone violating Sharia laws, whether Muslim or not.

Those fears are not unwarranted. 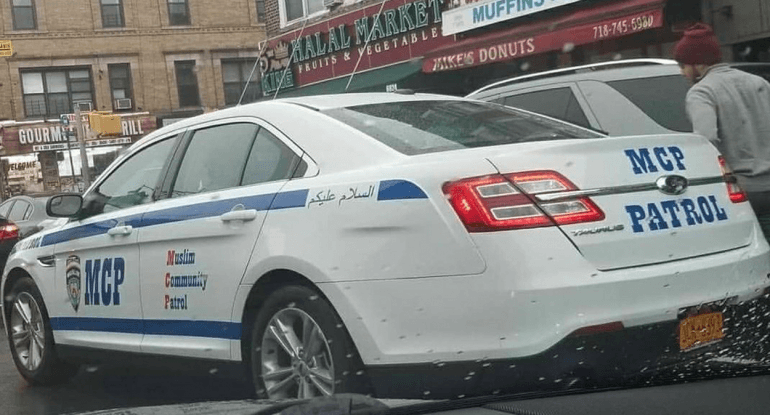 “We have seen Sharia patrols in Austria, Denmark, Sweden, the UK, the Netherlands, and Germany. So why is it inconceivable that they could arise in New York City? It isn’t,” wrote Robert Spencer of Jihad Watch.

No so long ago, an incident arose in England that sparked international outrage when a group of Muslims calling themselves the Muslim Patrol started demanding that non-Muslims in London move away from their mosque.

“We the Muslim community,” one said, “will continue to patrol the streets and clear the streets of all the vices and illegal activities.”

this is not a christian country. Christianity can go to hell.

The phrase “illegal activities,” however, does not actually mean violating state-sanctioned criminal laws, but those activities that are prohibited in the Quran, such as kissing in public, drinking and selling alcohol, homosexual display and, of course, being a non-Muslim too close to a mosque.

In the video recording, one Muslim Patrol “officer” can be seen shouting at what appeared to be a gay man, “What are you walking through a Muslim area dressed like a fag, man?  You need to get out of here.  Yeah. Get out of here quicker.”

“Anyone who tries to stop us,” he said, “we will take their alcohol, we will tell the women to cover up, and we will implement Islam upon your own neck. Islam is here.”

“You can go to hell,” he said of Christians.  “This is not a Christian country.  Christianity can go to Hell.”

In reality, Muslims living in Brooklyn and Staten Island probably have more to fear from the MCP than they do of the NYPD.

But there is something more sinister going on here? I believe there is.  See Part Two of this series later this week.

Dems are drowning in their own ‘basket of hate’