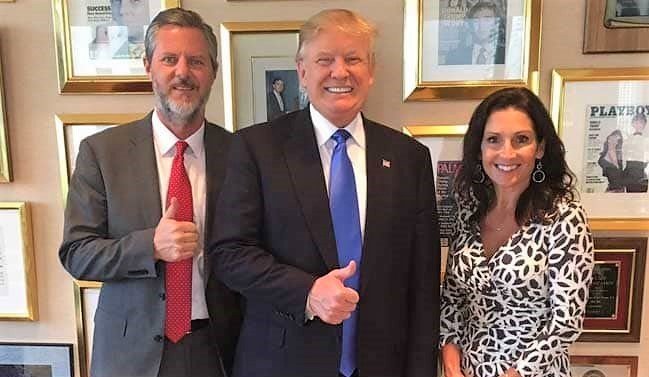 By now, most of us have seen or read about Liberty University President Jerry Falwell Jr.’s troubles with supposed racy photos of his wife and the embarrassment of putting a lid on them, efforts that involved a now disgraced attorney.

I hesitate rehashing this story that is itself an embarrassment, now on a global scale, but in our age of fake-news, we often must risk spreading such stories even as we expose their harmful faults.

And this instance is a clear case of old-style yellow-journalism spew that spreads absolutely useless personal information just for the sake of attaching rumors and innuendoes.

For those unacquainted, actor Tom Arnold told Reuters News of a conversation with attorney Michael Cohen, who said he intervened on behalf of Falwell so embarrassing and salacious personal photographs might disappear.

According to Arnold’s take on what Cohen said, Falwell needed help because of a blackmailer threatening to make the photos public.

Most may remember Cohen as the former personal attorney for President Donald Trump now serving a three-year prison sentence for tax evasion, lying to a bank and making illegal campaign donations. Yes, it’s the same guy. He also pled guilty to lying to Congress. So this much we know about Cohen: He’s a liar.

Cohen, according to the Reuters story about what Arnold said, described Falwell’s photos as “terrible” and that he even had a sample copy of one of the photos in his possession.

Reuters was not able to independently verify whether any such photos actually existed, or even if a blackmailer had made any threat about them. Neither did Reuters attempt to verify if Cohen attempted any role in retrieving the photos that Arnold desribed.

What Reuters said they had, however, was a tape of the conversation (recorded in secret by Arnold) on which the convicted liar, Cohen, made the claim.

Reuters listened to the tape, and apparently in today’s era of fake-news, sleazy media that now guides even the mainstream news outlets, that was enough to publish a narrative on it for the world to see.

Other media quickly followed suit with their own sleazy accounts distributed throughout all the modern mediums: television, radio, print and social media; another day in their collective masquerade as if the protector of our hearts and minds.

It should be unimaginable to all of us to see the media sink to such new lows, degrade itself past recognition, and ruined its industry beyond repair.

No wonder there are such headlines as: “You Are Now More Likely To Know A Prostitute Than A Primetime CNN Viewer.“

The entire media industry has lost all credibility with the public.

There was a time when mere embarrassment (without reference to wrongdoing) would simply not be printed in a story among journalism professionals: doing so may ruin someone’s reputation, career or family, and offer no probative value.

Obviously such restraint is no more a consideration. We see this shoddy journalism repeated daily, every day, even several times a day.

But this particular news story is more shameful than most.

This is Arnold providing the media with a recorded conversation of someone who now sits in jail as a convicted liar, deceiver and a cheat. Why does this get any play at all?  Shouldn’t Reuters at least verify some of the claim?

I don’t know, no one knows, whether any such “terrible” Falwell family photos exist. Neither do I care. No one outside close family and friends should care. It’s a private matter.

It matters not to me whether they are racy, intimate or explicit. Even if they do exist as portrayed by the Reuters story of Arnold’s account about Cohen describing them as “terrible,” the photos – at most – are property of husband and wife. Supposedly, a blackmailer got a hold of some family photos and wanted to exploit the cache for money.

Yet the media can’t resist an opportunity to inflict wounds on a Christian, conservative household. That is why gossip sourced from a disbarred criminal con-artist will do, even as that former lawyer sits in a federal penitentiary serving out his 36-month penalty for other things he made up.

Does the media not know how petty and infantile they look reporting this completely unverified matter?  Once again, the alleged photos do not involve some accused “other” woman, no screen shots of a secret, back-alley affair here.

As hard as they try and want! as much as they twist and wish! they are not able to morph this unproven story into some sort of Kim Kardashian/Pamela Anderson sex tape.

But they can produce their yellow-journalism filth, fan the flames of vanity, draw clicks on their links and pump up their paper sales marginally. That’s what yellow journalism is all about.

For all the hatred the media has against Christians, at least the Bible has the correct response on approaching such accusations.

“Every fact is to be confirmed by the testimony of two or three witnesses,” says 2 Cor. 13:1.

There was a brief time in history and not so long ago when much of the media held such principles as this scripture dear to their hearts. Such practical guidelines were instilled into the college students who sought careers in journalism.

But now the media needs only a rumor culled from gossip of what a corrupt, condemned, imprisoned, fraud and convicted liar may have said about a Christian conservative man’s private family photos.