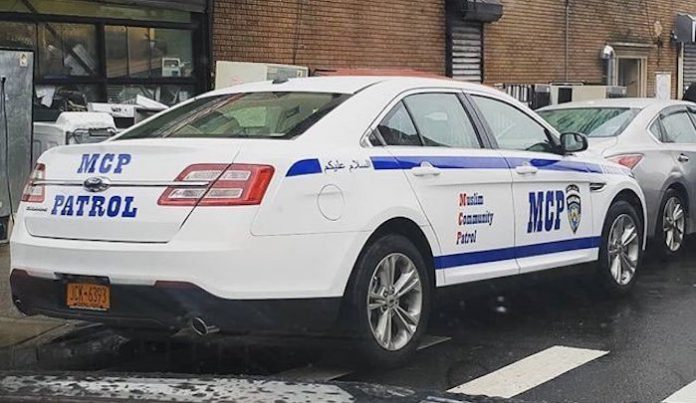 The presence of Muslim Community Patrol cars in New York City is reminiscent of the Islamic policing I saw in Europe when filming our epic documentary film, Europe’s Last Stand – America’s Final Warning.

Our film focused on the Five Pillars of Islamic Conquest: Immigration, Imams, Isolation, Islamization and Implosion.

To fully comprehend the sinister nature of NYC having Muslim Community Patrol cars – which resemble actual NYPD police cars, but are not officially sanctioned by the NYPD – one must understand the Five Pillars of Islamic Conquest.

Here’s a brief description of each Pillar.

This is an easy one, but without it, conquest would be nearly impossible.

Muslims have been invading western countries for the past couple of decades through mass immigration, both legally and illegally. Muslim immigrant communities tend to have large families, the size of which is often fueled through the practice of polygamy.

But having a population, even a large one, does not make for a conquest.  Someone needs to lead that population forward, which brings us to the next Pillar.

Any male can claim to be an Imam and set up a mosque.  A mosque can be located in a bookstore, an apartment building or even inside an abandoned building.

In Barcelona a mosque was set up in an abandoned bullring at the Plaza Monumental. More and more, Muslims have been taking over abandoned churches and converting them into mosques in Europe.

For the radical Islamist, these become headquarters for their war.

According to the Quran, Muslims who live in a foreign country are in a state of dar al-harb, meaning they are living in “the house or abode of war.”

The first duty of the Imam in Europe (whether self-proclaimed or imported from an Islamic country such as Saudi Arabia) is to get the Muslim population to realized they are living in that “house of war,” dar al-harb.

For those Imams seeking Islamic conquest, non-Muslims are viewed as the enemy of Islam.  Their duty is to try and subjugate the land until it becomes dar al-Islam, meaning “the house and abode of Islam,” which brings us to the next Pillar.

The Quran commands Muslims living in foreign countries to separate themselves from non-Muslims.

“And it will be said to the infidels, get apart from the believers today, O the guilty ones.” Quran 35:59.

Across Europe, Muslim communities have separated themselves from the infidels, establishing pocketed areas that have been commonly referred to as “No Go Zones” or “Cultural Sensitive Zones” for outsiders.

I have been inside many of these zones where non-believing residents have been forced to leave their homes, where Muslims have their own non-elected mayors, and where police and emergency workers are either fearful to go or do not enter.

The purpose of these controversial zones is for Muslims to establish their own protected, exclusive and Islamic-controlled areas as a base from which they can later expand and conquer their neighbors.

They want to create a country within a country.

More on this in Part Three because this is where Muslim Community Patrol cars on American streets should become a concern to us.

It is from these isolated zones that the next stage of Islamic conquest moves forward.

Islamic conquest is all about requiring both Muslims and non-Muslims to live under Sharia law.  This is why Sharia Patrol Units have been seen in such western European countries as England, Denmark, Sweden, the Netherlands and Austria.

Sharia enforcement tactics have been used to ban the use and sale of alcohol, require Muslim women to cover up, restrict pork products from school cafeterias, advance polygamy, shut down art performances, criminalize speech that offends Islam and establish Sharia Courts.

Often, localities that refuse to comply have been the subject of riots, car burnings, property destruction, rape and murder.

Though bullying, terror and carnage have been effective tactics for allowing Muslim controlled areas to expand, these schemes represent just one side of their double-edged sword of Islamic conquest.

Implosion represents the idea of letting society implode under the weight of its own foolish, contrive and fatally flawed set of beliefs.

Islam uses western ideas of cultural diversity, political correctness, non-critical acceptance and minority favoritism as a way of allowing western countries to commit its own “Hara Kiri,” if effect, western countries are pushed onto their own sword of stupidly.

From milking social benefits programs for money to claiming racial and religious discrimination at the slightest hint of opposition, those seeking Islamic conquest gain both financial resources and muted resistance in their attempt for Islamic conquest.

No one can deny that the strategies of the Five Pillars of Islamic Conquest are effective.  The method is brilliant, rising to the level of genius.

What can be faulted, however, are Americans if we chose to turn our eyes from the sight of Muslim Community Patrol cars that are patrolling the streets of a free nation.

More in Part Three in this series.  Read Part One below.

Doctor thinks I have a ‘malignant,’ ‘incurable’ condition called ‘whiteness’