A number of predicted public schools are slated to promote and host an event of religious indoctrination on Friday, Feb. 1, but most parents and caregivers don’t know it is about to happen.

(If World Hijab Day is scheduled for your school, for your children or grandchildren, let us know at www.christianaction.org online)

The event promotes Islamic religious practice by asking students to wear the Islamic hijab during school hours.  In some cases, teachers have actually helped students put on the religious garment.

According to World Hijab Day organizers, the purpose of the event is to show that Islam rules the world.

On the official Facebook page of World Hijab Day, the group states:

“We rule the world, don’t we?  And nobody knows that.  Why?  Because we see everyone and no one sees us.  We cover for God.” 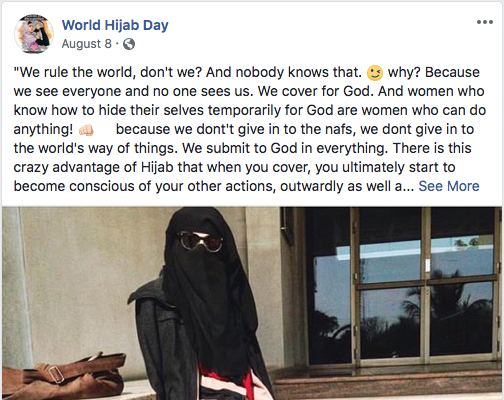 Warning families of the Islamic indoctrination taking place in the name of “World Hijab Day” has been difficult because of political correctness, but a constitutional law attorney nails the critical issue on the head saying, “Follow the law, don’t do it.”

It is nevertheless happening, an event of religious indoctrination that parents and caregivers should know about.

If it’s happening in a school that your children or grandchildren attend, the first step is to let us now about it at www.christianaction.org online.

Because World Hijab Day events in public schools constitute endorsements of Islamic religious practice by government, schools must cease and desist, according to Constitutional and International law expert Johnny Davis.

At issue is the uniform (Islamic head covering) that Muslim women wear to obey Islamic law and to be in compliance with sharia statutes. Numerous schools have participated in this practice on Feb. 1 annually.

(If World Hijab Day is scheduled for your school, for your children or grandchildren, let us know at www.christianaction.org online)

Constitutional law expert, Johnny Davis, said the claim for World Hijab Day as a benign, non-religious event of cultural diversity isn’t even close to the mark.

“They shouldn’t take part in it in any way, shape, manner or form,” he added. “To do so would be to break the law. School officials cannot promote this.”

According to Davis, students can suggest an event or gathering focused on something religious such as hijab. The school may provide a place during what Davis called non-curricular hours.

the fact that they do not do such events for Christians . . . further demonstrates that they cannot do this

“Students must act on their own,” he said.

Of particular concern regarding World Hijab Day is the promotion by school officials. “By putting out the fliers, posters and so forth, what we are really talking about is religious indoctrination,” Davis said.

“It is indisputable that the [hijab] head scarf represents Islam,” he added. “In fact, if you look at Islamic theology, it represents the authority over women, their submission and domination by the Islamic male.”

What Parents Should Do

Davis said that concerned parents and care givers should first of all make sure to keep a good rapport with their children so the kids know they can talk about things that happen at school that may be inappropriate or wrong.

If parents find out that a World Hijab Day event is being planned at their children’s school, they should talk to school officials about stopping it or making sure it is not an event during curriculum hours promoted by the school.

“You do have legal redress,” Davis said. “The parents do have grounds to bring a lawsuit against this.”

He added that Christian religious liberty legal organizations such as the Alliance Defending Freedom, the Thomas Moore Society and the American Center for Law and Justice serve to help similar situations.

“The fact that they do not do such events for Christians, for Hindus, Buddhist or Jewish groups and so forth further demonstrates that they cannot do this,” he said.

The bottom line is get organized.

Gather Round for the Nuttiest Lefty Headlines of 2021