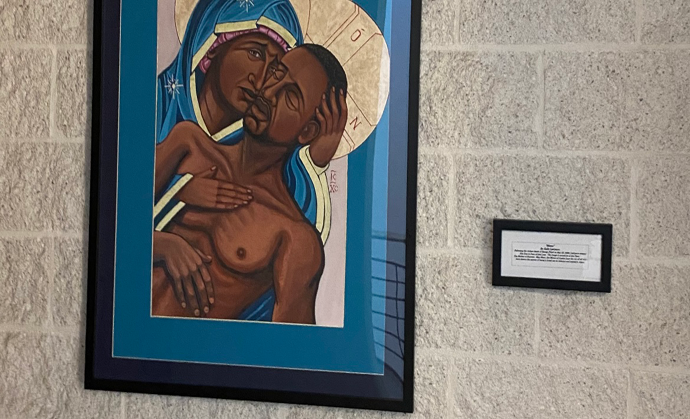 One can never excuse the taking or destruction of another’s property, but it is hard to condemn whomever is disposing of a silly and blasphemous painting that keeps being hung by administrators at a Catholic law school.

A second version of a painting of Jesus and his mother, Mary, in which the Jesus figure is painted to strongly resemble leftist martyr-du-jour George Floyd, has been removed from a wall at the Catholic University of America’s Columbus Law School.

The new artwork, hung outside the school’s chapel, replaced a larger version that disappeared last month after media coverage and claims by the artist that he had received death threats.

A CUA spokesperson told Religion News Service that the latest version of the painting, which follows an artistic style called the Pietà to depict Mary cradling Jesus’ body after his Crucifixion, was stolen the afternoon of Dec. 26.

Coverage of the first version of the painting, which is titled “Mama,” prompted an online petition calling for its removal. The painting was stolen from the university wall less than 24 hours later.

St. Louis-based artist Kelly Latimore claimed he began receiving a deluge of death threats at the same time. When asked the question “Is it George Floyd or Jesus?” about the painting, Latimore says he usually answers “yes.”

School officials defended the painting after it was stolen the first time. They claimed not to see it as depicting Floyd as Jesus and dismissed efforts to remove it, ironically citing a “no cancellation” policy. They replaced it promptly with the smaller version.