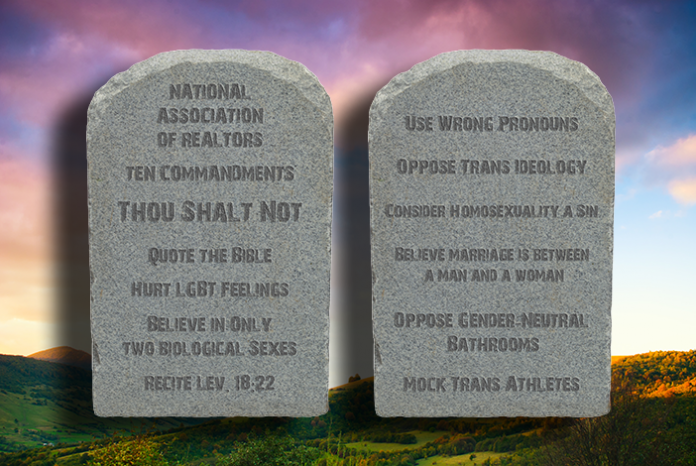 He was even more surprised when his association asked him to read specific Bible passages related to homosexuality. He was happy to comply and read the following verses:

“Don’t you realize that those who do wrong will not inherit the Kingdom of God? Don’t fool yourselves. Those who indulge in sexual sin, or worship idols, or commit adultery, or are male prostitutes, or practice homosexuality, or are thieves, or greedy people, or drunkards, or are abusive, or cheat people – none of these will inherit the Kingdom of God.” (1 Cor. 6:9-10)

When the association meeting was concluded, Huber was found guilty of violating the Realtor Code of Ethics’ ban on “hate speech and discrimination” after he shared a church flyer on social media that advertised an upcoming church event on the LGBTQ agenda.

You see, Mr. Huber is actually Pastor Huber, and the church event he promoted was being held at the Clinton Community Church in Missoula, which he pastors.

But it wouldn’t have mattered a whit if Pastor Huber was a pastor or full-time Realtor – because the National Association of Realtors (NAR), the umbrella organization of Pastor Huber’s local Missoula Organization of Realtors (MOR), says that any Realtor who uses “harassing speech, hate speech, epithets, or slurs” against any of the numerous protected classes (which include sexual orientation and gender identity), whether on duty as a Realtor or not, may be fined, lose their licenses, and/or forced to attend “sensitivity training.”

In Pastor Huber’s case, he was fined $5,000 and sentenced to sensitivity training, presumably to re-align his thinking with today’s woke orthodoxy. To date he has refused to pay his fine or attend the training and is on the verge of losing his license.

Ironically, the Realtor code of ethics also forbids Realtors from discriminating against people based on their religion. Didn’t the MOR do just that when they told Pastor Huber he couldn’t express his deeply held religious conviction that homosexuality is a sin?

The NAR added its new ethics update in November 2020, making it clear that “statements regarding religious beliefs will not be an automatic defense against a hearing panel finding a violation for these types of allegations.”

Since the NAR imposed this ludicrous edict with tentacles that reach into the most private corners of the lives of Realtors, numerous test cases have been filed with local Realtor boards across the country.

One of them involved a Realtor at a Bible study who read a Scripture passage, similar to the one cited above, that condemned homosexual behavior. Another person attending that Bible study actually turned in the Realtor to her local association. Boy, with friends like that …

Other cases involved comments made by Realtors in their offices that were overheard by other Realtors whose delicate sensibilities were offended.

Some cases, like Pastor Huber’s, focus on social media posts or comments made by Realtors about upcoming events that triggered the trolls who – like the notorious Hitler youth who ratted out their own family members – gleefully filed complaints against their comrades to try to force them into lockstep with the woke ideology.

Another involved a Realtor who posted photos of a home for sale in which the owners had a confederate flag flying at the property. The photo of the flag triggered a community member to say she felt threatened and filed a complaint with the local board. The Realtor was found guilty of discrimination. Even symbols that the Realtor association finds offensive can get Realtors fined or banned from the profession.

You can just see these trolls rubbing their hands in glee like a cartoon image.

Sadly, the NAR has adopted this woke ideology and is policing its own membership into compliance. If the NAR is attempting to purge its rolls of Christians, it is well on its way with this new plank in its code of ethics. But the national organization and the thousands of local Realtor groups across the nation might be in for a surprise. Call it the well-deserved rude awakening.

Pastor Huber has sued both his local MOR and the NAR, claiming they are violating his civil rights under Title 7 of the Civil Rights Act. This prohibits employment discrimination based on religion, among other things.

Moreover, Pastor Huber has a good case under Title 18 of the U.S. Code (Section 241). The MOR could be held liable for committing a hate crime against the pastor under federal law for “oppressing, threatening, or intimidating” him away from the “free exercise or enjoyment” of his constitutional rights. Those include, of course, the right to free speech and freedom of religion.

Just to add the cherry on top, let’s not forget that the local and national Realtor associations violated their codes of ethics when they discriminated against Pastor Huber – and their many other victims – on the basis of religion.

If the NAR is allowed to get away with this type of religious cleansing, then what industry will be next? Christians are already being challenged in the teaching profession; they’re being kicked out of the military for refusing to get the COVID vaccine on religious grounds; and Christian voices have either been completely silenced or greatly limited on social media platforms like Twitter and Facebook.

It’s time that the rank and file in America’s professions fight and take back our constitutional rights.