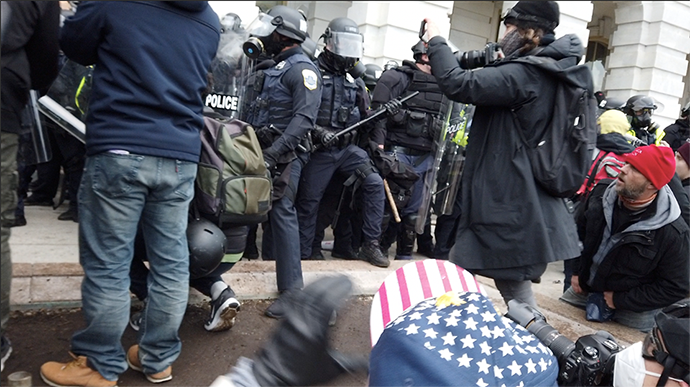 I never thought the scariest of times would look like this. It’s a sunny morning; Internet’s still here; just made some enchilada sauce for tonight’s dinner; ordered some slippers online (the mall was open but didn’t have what I wanted).

Meanwhile, my name is on an eyewitness account of how Americans spoke truth to corruption on Jan. 6 in Washington, D.C., and I can’t help wondering: Is someone going to try to arrest me? Will I lose insurance? My cloud-stored documents? My job and my capacity to help in my community? My ability to fly on a plane or own a weapon? My reputation as a law-abiding and dependable person? My rights to speech, assembly, petition, life, liberty and the pursuit of happiness?

All because I documented an attempt by an enormous crowd of people, who were being grossly ignored, to question their own government? Because I questioned it?

As a journalist, I am not the only one wondering these things. Teachers, entertainers, executives, firefighters, police officers, officeholders and appointees, business owners … anyone who has dared to publicly question the highly improbable results of the Nov. 3 election is suddenly the target of a hysterical, electronic bullying campaign by some of the richest and most powerful entities in the world.

It took Big-J Journalism decades to banish opposing views from its newsrooms; it still had all these old ethics based on critical thinking and good old American free discourse.

It took Big Tech … a Thursday.

Stop and think about what an odd response bullying is, to an accusation of fraud. The natural, grown-up reaction is to try and clear one’s name, lay out for all to see why one has won fair and square. When one questions a call in a football game, everyone gathers and watches the replay tape.

You don’t shut off the power to the stadium.

In fact, the compulsion to turn off lights, unplug microphones, smash printing presses, burn books, cancel social media accounts and deplatform web sites – all of these are mechanisms that let people convey ideas, please note – comes only in one situation: when you are wrong. When you have lost according to the rules, and you know it.

They DID steal it.

Thank you, Facebook and Amazon and Twitter, for the confirmation! A quarter of a million people from all walks of life were right to march on the Capitol. Joe Biden is not and will not be the actual chosen president of the United States, regardless of what the news media say. Two plus two does NOT equal five.

We know it, you know it. By the accepted rules, you most likely lost, and badly.

Which still leaves us in a climate of fear, of scary times. Do we really want to live in a country where there are truths (or even untruths) that one is not allowed to speak?

There are many countries like that. They are the worst countries in the world.

Run by the worst people in the world: the bullies.