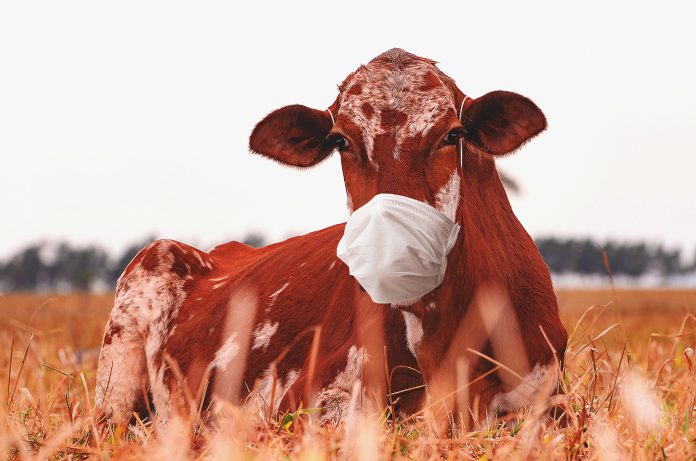 A dairy in France is trying to start a new trend that the owners hope will combat climate change: Masking their cows to reduce methane emissions from cow burps.

This is how far into Left has drifted into utter lunacy. The French dairy giant Danone hopes the cow masking will reduce emissions by 30% within seven years.

Here’s an interesting fact: The masks were designed by a team from the UK, part of an initiative from the Prince of Wales. Prince William? But doesn’t William have more important things to address, such as the bombshell assaults from his emasculated brother, Prince Harry, and Harry’s puppet master, Meghan Markle?

Oh yes, she’s also the former president of the International Union of Socialist Youth. So… could this wacky cow masking be part of a communist movement? Perhaps so. And it will also drive up dairy and meat prices in the Left’s deluded quest to save the ozone layer. Of course, the communists will love that, too.

As usual, these deranged ideas usually wind up in the United States after the lunatics in western Europe do their damage there.

We forgot to add a very important fact to this story: Saving the planet requires cows to wear not only masks, but also diapers to trap their flatulence. Pity the poor farmers who have to change those loaded diapers.

This sounds great for women: The Miss Universe pageant will be “run by women, for women, and composed of women.”

Yep, sounds great – but there’s a catch. The pageant owner who made this statement is actually a man pretending to be a woman. Anne Jakrajutatip is a Thai reality TV star and media mogul who purchased the pageant in 2022.

When he made his statement, the audience burst into applause. Perhaps his makeup and hair were so spot on that the audience didn’t realize he was a man, but they devolved into rapturous applause and oohs and ahs when he promised that only women would run the pageant.

“Diverse cultures, social inclusion, gender equality, creativity, a force for good, and a force for the beauty of humanity,” he blathered on meaninglessly as members of the audience swooned.

But to point out the obvious, it’s not an example of woman power when the first “woman” to own the Miss Universe pageant is a man. He’s male down to his microscopic DNA.

Congratulations, however, to R’Bonney Gabriel, an American model and fashion designer, who won the Miss Universe pageant, beating out 83 other contestants. And yes, she’s a real woman.

Ben Domenech, a conservative commentator, summed it up concisely when he addressed Jakrajutatip: “Dude, come on!”

“If you want to shop here you need to take off that shirt.”

Those are words you don’t hear too often. But they were spoken by an aggressive security guard at the Mall of America in Minnesota recently when he confronted a man wearing a T-shirt that he and two other guards deemed offensive.

So what did the shirt say? Did it advocate violence? Was it a Che Guevera T-shirt that’s so popular with American youth, celebrating that murderous Cuban communist?

No, it merely read, “Jesus Saves.”

In a viral video, the guard is heard telling the man, Paul Shoro: “Jesus is associated with religion, and it is offending people. People have been offended.”

After a tense altercation, the guards eventually allowed the man to remain in the mall.

Shoro explained why he wore the T-shirt.

“Jesus told me what to do. Go into the street and preach the Gospel… The Lord delivered me from the darkness … I started going to the Mall of America and met tens of thousands of people, but they stopped me preaching the Gospel.”

He said he would rather die or go to jail than take off his shirt.

On a positive note, a group called Bloomington Patriots plans to hold a demonstration in support of Shoro at the Mall of America on Feb. 4. They’re asking attendees to wear “Jesus” shirts.

Here’s some good news coming out of the FBI:

They have raided and shut down a secret Chinese police station operating out of a New York City building. This underground police station was alleged to be solving crimes among Chinese residents in the US without cooperating with local police.

The bad news: There was a secret Chinese Communist Party police station operating in the United States … and there may be more.

The raid was at the headquarters of the American Changle Association, a non-profit that purports to help Chinese residents who live in New York. Incidentally, the group’s former chairman, Lu Jianshun, donated to Eric Adams’ mayoral campaign in 2021.

The office is above a ramen noodle shop and next to an acupuncturist, where a receptionist was hilariously surprised to hear it was operating as a secret police station.

According to a study, there are more than 100 secret Chinese law enforcement installations worldwide in 53 countries and four in North America.

Predictably, a spokesperson from the Chinese Embassy in Washington DC denied this police station was a police station. “They are not police personnel from China,” the spokes-robot said. “There is no need to make people nervous about this.”

But we are nervous, very nervous. Because the US has its own laws and criminal justice system, flawed though it may be. Any police station operated by the Chinese Community Party in America is violating our laws and undermining the rights of American citizens.

If the FBI is shutting down Chinese police stations, maybe their next act could be shutting down the southern border – where millions of illegals, including Chinese communists, are streaming into the US.

We can only dream …

That’s the magical incantation that Harry Potter utters to remove a memory from one of his adversaries.

It’s even more fitting now that an “artist” named Laur Flom from Canada has been removing the name of the Harry Potter books author, J.K. Rowling, and replacing the book covers with her own custom covers.

Why you may ask? Because Rowling, says Flom, is such a heinous transphobe that she wants readers of the books to be able to enjoy them without the ethical issues of actually seeing the evil author’s name. Flom is also removing Rowling’s name from the copyright and title pages.

So, what did Rowling say that was so transphobic?

In 2020, in response to the growing hysteria over non-existent gender fluidity, Rowling tweeted: “If sex isn’t real, there’s no same-sex attraction. If sex isn’t real, the lived reality of women globally is erased. I know and love trans people, but erasing the concept of sex removes the ability of many to meaningfully discuss their lives. It isn’t hate to speak the truth.”

It was like Voldemort shot magic thunderbolts from the sky after she made that perfectly sane and truthful statement – yet Rowling has been targeted by the LGBTQ, etc., community ever since.

Flom explained why she’s bastardizing Rowling’s books: “I was a fan. Growing up when I did, it was a given that you would read Harry Potter. But after J.K Rowling’s views on people like me came out, it left a bad taste in my mouth.” Then, in a tasteful P.S., Flom added, “F**k her.”

Yes, Flom is just another deeply troubled transgender. She’s a woman pretending to be a man who calls herself “they.”

Flom added, “the purpose of this project is to create a safe space for fans to find comfort in the books and critically engage with J.K Rowling’s work.”

All this flexing of her ethical muscles is hard work, so Flom charges $170 for each newly bound book and $1,200 for a set of all seven. But it’s about ethics, not money, because a portion of each sale – she claims – is donated to transgender charities.

In a related development surrounding the Harry Potter author, actor Sebastian Croft has been savaged by the trans community for using his voice in a Harry Potter video game, “Hogwarts Legacy.”

Croft engaged in the usual groveling, weeping, and apologizing ad nauseam as the woke mob held the ax over his head. On Twitter, he responded: “I know far more now than I did three years ago (when he was hired for the job), and hope to learn far more in the next three. I’m really sorry to anyone hurt by this announcement. There is no LGB without the T.” He added a sweet little heart emoji.

So much for ethics.

Finally, some good news: A group of LGBTQ etc. students who claimed they were discriminated against have lost a suit in federal court in Oregon.

The judge dismissed the class-action suit brought by 40 students who claimed that the Department of Education failed to protect the students at religious schools from discrimination.

BUT the statute contains a religious exemption, which allows religious schools to exercise their constitutional religious freedom and ban LGBTQ clubs and organizations at the schools.

Many of these students have staged walk-outs, monthlong sit-ins, and protests advocating for LGBTQ-friendly policies. In addition, Yeshiva University students filed a lawsuit against the orthodox Jewish school for refusing to recognize an LGBTQ student club.

The court ruled, however, that the schools have a constitutional right to reject clubs that violate their religious principles.

Unfortunately, the court also stated that the students had been denied equal treatment by not having LGBTQ clubs and organizations available at their religious schools. They had to throw that in, didn’t they?

We disagree. The students did not have to attend religious schools with deeply held convictions that oppose the LGBTQ agenda. The students were essentially testing the courts to see if they could inflict damage on Christian and Jewish schools, and so far, they have failed to make a dent.

However, they vow to appeal the decision … so stay tuned.

The Deadly Push for a Fashionable, Painless Suicide