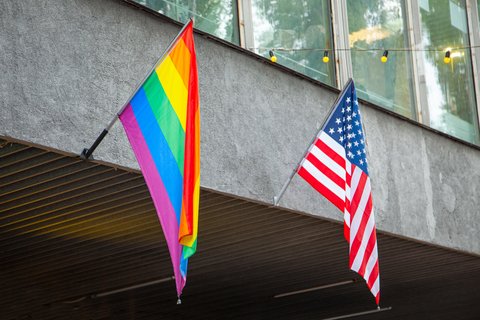 The Biden administration, installed under highly questionable circumstances in January, continues to make homosexuality the chief rallying point of the United States government.

And what better rallying point than a flag, which is not the U.S. flag, but instead celebrates homosexual sex and not knowing whether you are male or female?

Speaking for the State Department, Secretary of State Antony Blinken revealed at an Atlantic Council event on June 21 that the department will fly something called the “Progress” flag – a mashup of symbols for various kinds of sexual confusion – for the first time to mark Pride Month, the New York Post reports.

The flag incorporates a black, brown, light blue, pink and white triangle into the rainbow-colored pride flag — as “a symbol that encompasses the diversity and intersectionality of LGBTQI persons and communities around the world,” Blinken trumpeted.

He said the flag would be flown for three days beginning June 26, the anniversary of the 2015 Supreme Court decision that legalized homosexual “marriage” nationwide. The final day of the tribute, June 28, is the 52nd anniversary of the beginning of the Stonewall riots in Greenwich Village.

Blinken said U.S. ambassadors around the world have permission to fly the pride flag if they desire. In 2019 the Trump administration denied requests from U.S. embassies in Brazil, Germany, Israel and Latvia to fly the flag during that month.

“When it comes to the American flagpole, and American embassies, and capitals around the world, one American flag flies,” then-Vice President Mike Pence declared at the time.

Last month, U.S. embassies around the world displayed Black Lives Matter flags to mark the anniversary of George Floyd’s death in Minneapolis and to attempt to stir up new leftist hatred of law enforcement.