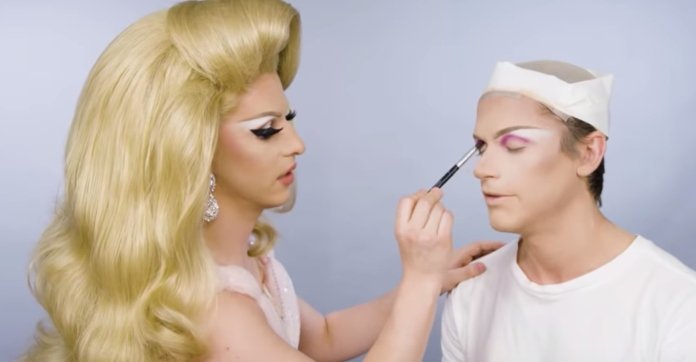 One Texas teacher had a strong message for parents who voiced concerns after his school district allowed a drag queen to demonstrate makeup application to a high school cosmetology class:

Parents need to shut up and let public school teachers raise their children.

The Willis school district invited the man, who dresses as a women and goes by the name of Lynn Adonis-Deveaux (his real name is unknown), to come into the school for the class, according to local news reports. The event was not unannounced, but several parents were concerned that it happened in the first place.

“I’ve got a problem when somebody with a false name enters a school and has advertised himself as an adult exotic dancer for men … Nobody would be allowed in a school under those circumstances,” said Dale Inman, a trustee of the Conroe ISD.

In a Facebook post, however, Willis ISD teacher Anthony Lane declared, “I believe that raising a child is the responsibility of the community, and that parents should not have the final say. Let’s be honest, some of you don’t know what is best for your kids. I have learned a ton about what is best for [my son] Ethan from his teachers, not the other way around.

“Parents believe they should be able to storm the school in the name of political and religious beliefs if something happens in the school that they are morally opposed to. They forget that we make a promise to prepare their children to live in a diverse world. We are not required to protect the misguided, bigoted views of their parents.”

So, if you do not agree with this teacher, let it be known that it is you who are misguided and bigoted, and that your children belong to him, not you.

The Houston-area community has remained split on the issue. David Riley, a pastor at Grace Family Fellowship Church, wondered how guest speakers are vetted.

“My question is this: Who examined the character of the person who stood before our kids?” he asked at a trustees meeting. Willis High School Principal Stephanie Hodgins said her staff is working to improve communication.

Sign our petition to declare: The United States IS a Christian nation.