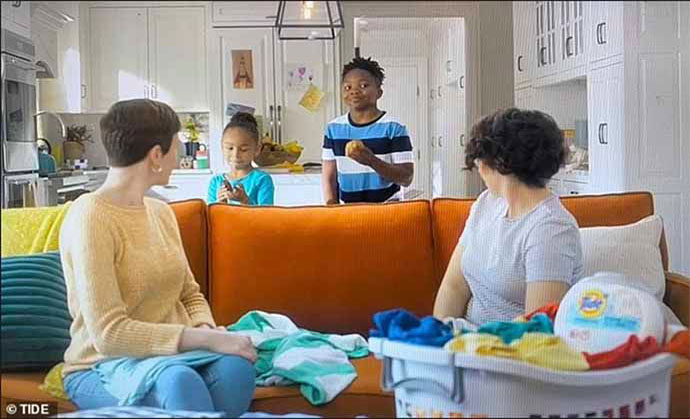 Big corporate advertising is no longer about getting you to buy the product.

Once, products had to meet a consumer’s standards. Now they demand that you reject your own, peddling shame and ostracism to anyone who dares to defend traditions, faith, critical thinking or common sense or even truth itself.

No matter how outrageous the ideas they are trying to implant in you (or your children) via cereal, air freshener … and laundry detergent, the message is always there: “If you have your own ideas about what is decent, normal and fair, you are subhuman and a freak.”

How common, really, are lesbian couples with two black children in their household? Are they a big segment of the laundry detergent market?

Tide detergent’s advertising firm seems to think so, pitching their product by portraying a wild aberration from what the vast majority of families are – maybe even the polar opposite of what you consider a family to be – so that just maybe you will change your petrified and Neanderthal mind. Because if you’re watching their laundry detergent ads, and need laundry detergent, that’s no doubt what your mind is.

Perhaps, though, they are merely pandering to whites who feel guilty about being white?

There’s yet another possibility, however. Maybe Tide and its Madison Avenue geniuses are simply running scared themselves – running scared of a cruel, merciless force called Fashion, which delights merely in thought-control through making others feel unfashionable.

Look what happens when you dare to criticize a “woke” ad, even one as ham-handedly manipulative as this one.

Tide’s former slogan: “Tide’s in, dirt’s out.” Perhaps it’s time for a new slogan: “Woke’s in, Traditional marriage’s out.”