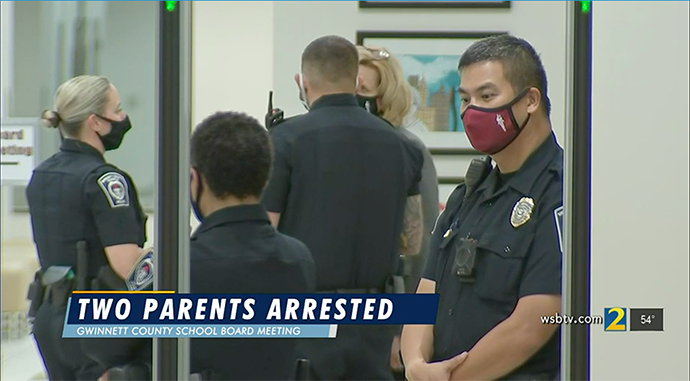 Tensions continue to escalate at local school board meetings after officials of the National School Boards Association colluded with Democrats and the White House to try and have upset parents labeled and treated as “domestic terrorists.”

In Gwinnett County, Ga., a school board meeting Nov. 18 saw authorities take away two parents, both women, in handcuffs. District officials confirmed to Channel 2 Action News that the moms were taken into custody before they got into the meeting itself.

Another woman at the meeting shared video she took of the arrests with Channel 2, which shows a woman actually struggling with a law enforcement officer as she is placed under arrest.

As a result of Democrats and the media striving to portray worried parents as radical extremists, security is being heightened by some school districts. The Nov. 18 Gwinnett meeting saw a metal detector in place for the first time, along with security screenings being done on attendees trying to enter the meeting.

Inflammatory issues at the meetings have included mask mandates, the teaching of anti-white and anti-American racism, and policies that force students and staff to play along with some students’ transgender fantasies.

A Gwinnett County School District spokesperson said a woman was arrested on Nov. 18 when she attempted to run through the metal detector. Police later found scissors in her purse, the spokesman said.

Although scissors are a not-uncommon tool of daily living, officials say she then grabbed them and fought with an officer. She is being charged with obstruction of a police officer.

Also arrested outside the meeting was a woman who had been asked by the district not to return as a result of her behavior at October’s meeting. That individual was charged with trespassing.