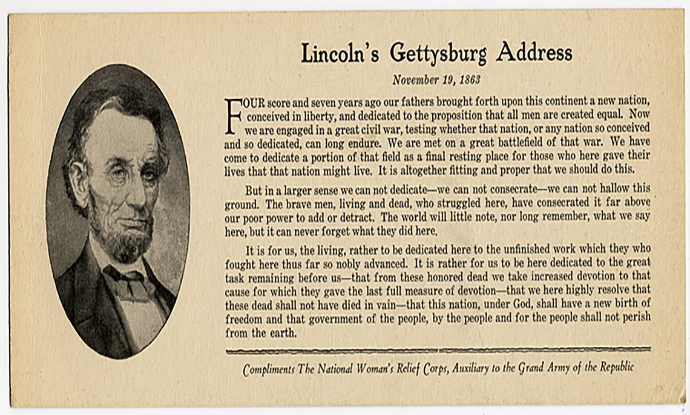 It is a time of growing polarization in the United States, and the recent actions of two universities clearly show the opposite sides to which academia is gravitating.

First the dark side, as Cornell University’s Kroch Library stealthily took down a display that included a bust of Abraham Lincoln along with a bronzed version of the immortal Gettysburg Address.

A faculty member who noticed the sneaky “cancellation” said librarians told him that someone had complained about the white Civil War-era Republican president who so offensively ended slavery in the United States.

“Someone complained, and it was gone,” was all that Cornell biology Professor Randy Wayne was able to find out about the tribute, which had been on display at the library since 2013.

Wayne told The College Fix that he e-mailed Cornell University President Martha Pollack about the removal in late June, asking simply what had happened to it, but that he has gotten no reply.

Pollack’s office and the Ivy League school’s media affairs office have also not responded to repeated emails and a phone call from The College Fix.

On the other side, the side of light and learning, is George Washington University (GWU).

That school has roundly rejected demands from students to fire Clarence Thomas from its staff after the conservative Supreme Court justice authored an opinion opening the door to ending gay marriage and access to contraception as Constitutional rights established by the Due Process clause.

The university has “received requests from some members of the university” to fire Thomas, who teaches a constitutional law class, said a spokesman, according to DailyMail.com.

In a June 28 letter to students, GWU officials said they will not dismiss Thomas as an adjunct professor because he has not broken the school’s policy on academic freedom.

“Debate is an essential part of our university’s academic and educational mission,” stated the letter, no doubt incensing leftist academics who think universities exist to tell everyone how to think correctly.

Radio host is fired for saying Kamala Harris is ‘colored’

Christian doctor in UK who was fired after refusing to call...