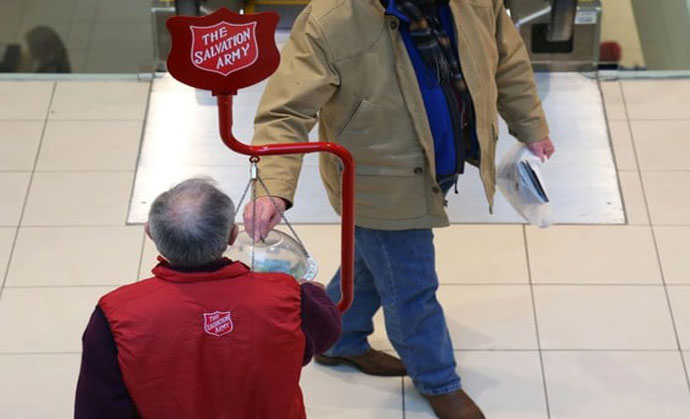 With four days left before Christmas, at least one Salvation Army chapter’s Red Kettle campaign has raised barely more than half that amount.

Could it have something to do with the charity’s Alexandria, Va.-based leadership telling white Christian donors that they are racists who need to apologize to any and all blacks?

Dohmann blamed the pandemic and a lack of volunteers to ring the bells.

However, the charity’s “Let’s Talk About Racism” guide, released recently, caused a backlash so severe that the group has pulled it back from the public eye.

The guide asserts to its generous, charity-minded white Christian audience that Christianity as it exists today in the United States is fundamentally racist, that white Christians to repent for being white and should give “a sincere apology” to blacks for being “antagonistic … to black people or the culture, values and interests of the black community.”

“Many have come to believe that we live in a post-racial society, but racism is very real for our brothers and sisters who are refused jobs and housing, denied basic rights and brutalized and oppressed simply because of the color of their skin,” one lesson explains. “There is an urgent need for Christians to evaluate racist attitudes and practices in light of our faith, and to live faithfully in today’s world.”

In the “Study Guide on Racism” that accompanies the manifesto, Salvation Army moralists reveal that all whites are racist even if many of them don’t realize it.

In a typical leftist non-apology given on Thanksgiving Day, the venerable organization admitted that the publication had become a “source of controversy,” claiming it was created to be a “voluntary resource.”

“We have done our best to provide accurate information, but unfortunately, some have chosen to ignore those efforts. At the same time, International Headquarters realized that certain aspects of the guide may need to be clarified,” the statement reads. “Consequently, for both reasons, the International Social Justice Commission has now withdrawn the guide for appropriate review.”

The International Social Justice Commission is an arm of the Salvation Army that created the guide.