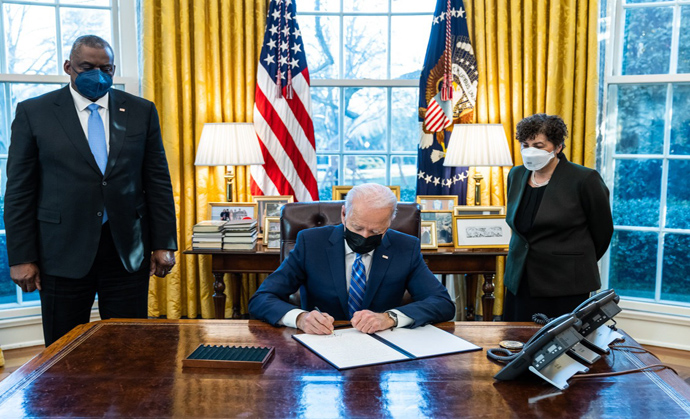 In the incoherent, baffled-yet-bullying style that has become his trademark, Joe Biden on a recent trip to New York City simultaneously pledged to combat illegal guns and threatened the 2nd Amendment, which actually is the safeguard of completely legal gun ownership.

Biden on Feb.3 also abused his hyper-liberal base by belittling their drive to “defund” police, instead calling for more money, this time for community policing.

He also continued his push to crack down on illegal guns with – of course – more money for the ATF. Yet this was at the same time that he referred to the 2nd Amendment as not being “absolute.”

“The answer is not to abandon our streets,” Biden said, trying to address a sharp increase in shootings nationwide, only days after emotion-charged public funerals for slain New York City police officers. Coverage was by DailyMail.com.

“That’s not the answer. The answer is to come together, police and communities building trust and make us all safer. The answer is not to defund the police. It’s to give you the tools the training the funding to be partners, to be protectors,” he said, despite the Democratic party’s and media’s increasingly vocal antagonism toward law enforcement.

Then came the targeting of the 2nd Amendment: “Listen, this doesn’t violate anybody’s Second Amendment Right? No violation of 2nd Amendment right. There is no amendment that’s absolute,” Biden claimed as he talked to the press.

Biden was wrong again, actually. As the National Review points out, it was and still is legal for an American to buy a cannon.