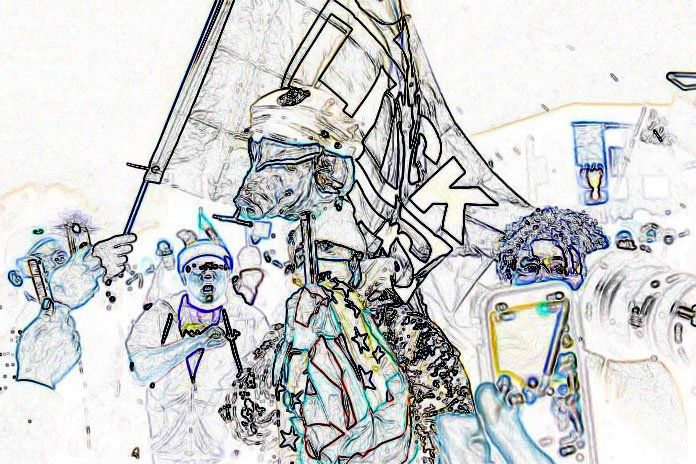 Protesters who support fighting with police during traffic stops have upped the ante in Minnesota, displaying a pig’s head on a stake while protesting a police shooting which officials are calling accidental.

Some 24 people were arrested in the melee on April 14, the fourth night of unrest following the shooting three days earlier of Duante Wright, who resisted police after they pulled him over for a traffic stop.

According to DailyMail.com, One anonymous demonstrator said former officer Kim Potter “committed an act of war” when she fatally shot Daunte Wright in Brooklyn Center on April 11. She had warned officers around her with the word “taser,” but apparently mistakenly fired at Wright with her sidearm instead.

The protest occurred at the Brooklyn Center police headquarters.

One demonstrator — pictured holding a severed pig’s head wearing a police hat – told Sean Hannity of the most recent protest: “We don’t use tear gas. We don’t use gas.” After it was pointed out that projectiles are more dangerous, the protester added: “Of course, but that’s the only way they’re going to learn anything.”

“That’s the only way that things could ever change is if people start throwing things. The institution of policing is bad.”

Potter, 48, was charged on April 14 with second-degree manslaughter, which carries a maximum sentence of 10 years in prison. She posted $100,000 bond the same evening and was released from the Hennepin County jail, online records show. She was scheduled to make her first court appearance on April 15, having quit her job on the Brooklyn Center police force two days after the shooting of Wright.

Demonstrators taunted sheriff’s deputies barricaded behind concrete blocks and a chain-link fence in front of the police headquarters, throwing objects over the barrier. Officers in return periodically approached the fence to shoot the crowd with pepper spray.

Alabama governor signs bill making it a felony to give children...