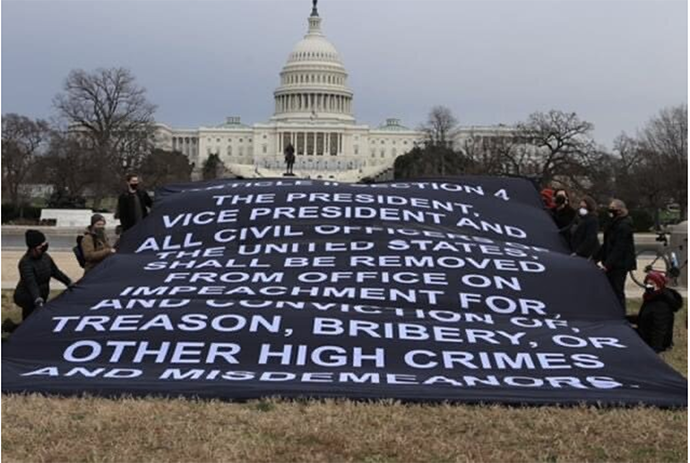 Black Lives Matter (BLM) might be feeling a bit upstaged; all their rioting through the summer of 2020 was met largely with media cheerleading, while the actions of Trump-supporting patriots on Jan. 1 have been treated in the press like a new 9-11 attack.

It might have been what drove a mob of BLM protesters to Capitol Hill on Jan. 13, where they had their own clash with police outside a fence erected last week to keep Congress safe from Trump supporters during the planned inauguration.

According to the Washington Examiner, the group attempted to tie an “EXPEL ALL FASCISTS” banner to the fence, but encountered strong resistance from the police, who ordered them to leave Capitol Hill because they were protesting without a permit. Protesters resisted and shouted back. Capitol Hill police and a contingent of the National Guard pushed the group off the Hill and dispersed them.

The protesters singled out Missouri Sen. Josh Hawley and Texas Sen. Ted Cruz as the Republicans most deserving of “expulsion” from the Senate.

“It’s not enough to impeach the president of the United States,” ShutDownDC organizers told reporters, who were largely invisible at the massive Jan. 6 protest at the same location. “We need to expel the members of Congress who aided and abetted and facilitated the political conditions to allow a fascist mob to overtake the Capitol and have five people die.”

In a press release, ShutDownDC claimed that it would “calmly reclaim the space” that Trump supporters overran on Capitol Hill on Jan. 6 as Congress rubber-stamped a presidential election stained with hundreds of sworn reports of fraud and other irregularities.

When the BLM protesters approached the fence, police assembled in large numbers and told the group to leave the premises. “If you do not leave, you will be subject to arrest,” an officer told them.

Protesters began chanting after that, with some accusing police of “allowing” Trump supporters to storm the Capitol.

Starbucks barista says she was fired for refusing to wear gay...

Tokyo Olympics bans taking a knee or raising a fist for...