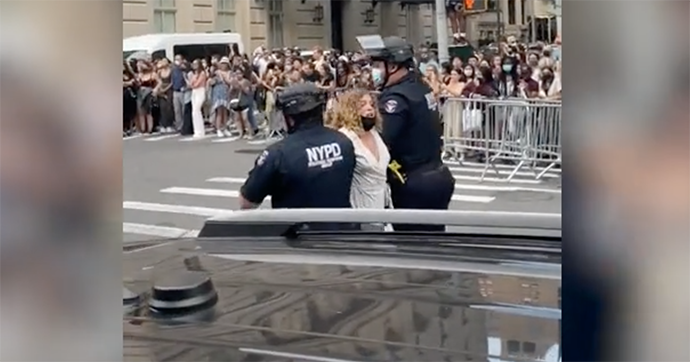 In a kind of clash of leftist cultures, weirdly united in their mutual quest for cameras and news coverage, a huge crowd of demonstrators gathered outside the 2021 Met Gala in Manhattan on Sept. 13 just as a host of American royalty arrived for the biggest night in their fashion calendar.

The theme of the protest was soon revealed: Get rid of police forces.

According to DailyMail.com, multiple arrests were made as the throng of Black Lives Matter protesters clashed with dozens of NYPD officers outside New York’s stately Metropolitan Museum of Art. In videos of the confrontation caught on mobile phones, police can be heard yelling at demonstrators filling the street to “Move back” while the protesters chant “Black Lives Matter” and “Defund the police.”

A copy of a printed flyer from the protest revealed that the unrest was initiated by an “autonomous group of NYC abolitionists who believe that policing does not protect and serve communities.”

“The NYPD has a total financial allocation of $11 billion per year,” the flyer ranted. “This money goes towards racist policing that destroys Black and brown communities while people who are struggling do not get the resources they need. CARE, not COPS, is the answer.”

It was unclear how many protesters were arrested.

Meanwhile, inside the museum, leftists with more money and fame enjoyed a celebration called, “In America: A Lexicon of Fashion.”