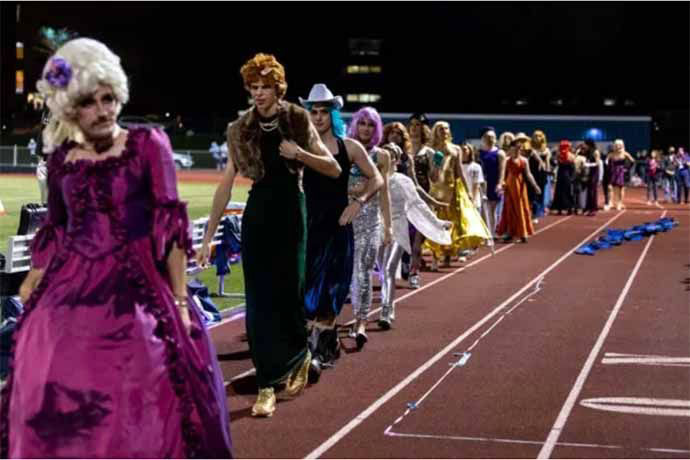 Halloween came early to a Vermont high school football game on Oct. 15, with students
dressing up as Drag Queens before a crowd that had – according to at least one student – unfamiliar faces.

“Most of the people in the crowd were not from my school — I was surprised by all of it,” said Chloe Schoenfeld, a senior at South Burlington High who provided tech support for the halftime gender-bending gay-pride spectacular.

Some 30 students and teachers alike lined up in the high school parking lot before parading and took the field to screams of “Drag ball, drag ball, drag ball,” from a crowd waving colored balloons. Some of the cross-dressers had on dresses and high heels; the girls aspiring to be males wore suits and had painted-on facial hair.

The advisers who made the event happen were the Burlington and South Burlington high
schools’ Gender-Sexuality Alliance groups.

Burlington Principal Lauren McBride cheered on the spectacle, surely what any parent dreams of seeing at their child’s high school, and announced, “They’re coming out, and they look fabulous.”

“We got kings, we got queens, we got in-betweens,” an announcer proclaimed over the PA
system. “We need you to give it up for all these performers.”

Except were they performing, playing roles for fun and entertainment?

Matthew Claeys, a member of the Burlington teaching staff, wore a gold outfit, wig and cape, because that is of course what women wear. He called himself Stardust. “There was a degree of just letting go, and saying who am I gonna be as a queen? And when I adopted Stardust I was like gold smiles, throwing out kisses,” the educator said.

“I’m glad that they’re showing support, I really am,” said Aria Batten, a member of Burlington High School’s Gender-Sexuality Alliance. “I just wish it wouldn’t be at something as unambiguous as this, because anyone can say, ‘Oh yeah I support this,’ and then not do
anything else.”

The “anything else” that gay activists want to see from other people was not stated.