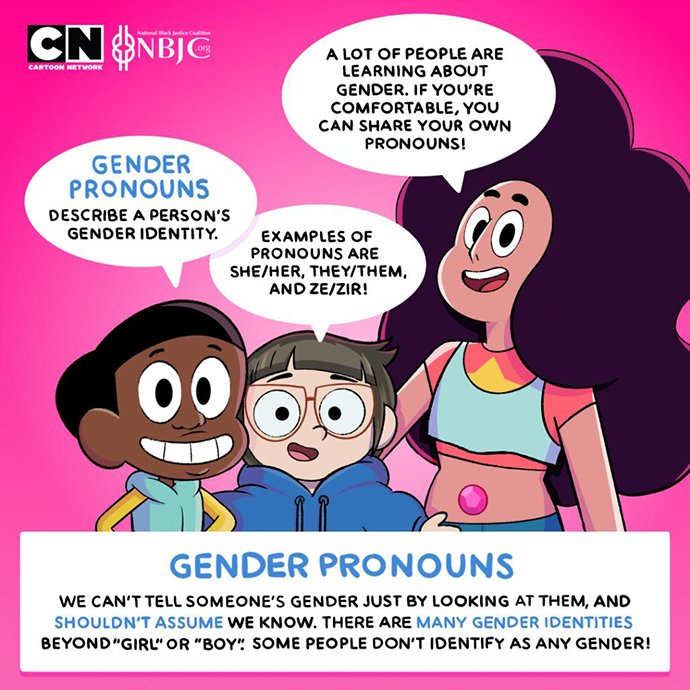 Isn’t it great when strangers start conversations with your children about sex?

If the Cartoon Network is watched or followed online in your home, that’s what is happening. The cable purveyor of children’s fluff is now telling young viewers about the many different “gender identities” they can adopt, according to a Daily Wire report.

In a social media post on Dec. 14, the channel shared a comic about how “important” it is not to assume another child is a boy or a girl based only on appearance.

“Here’s to not only normalizing gender pronouns, but respecting them, too. Whether you use he/she/them or something else, we acknowledge and LOVE you!” Cartoon Network said in a caption with the post.

“Gender pronouns describe a person’s gender identity,” says another “comic.” “Examples of pronouns are she/her, they/them, and ze/zir. A lot of people are learning about gender. If you’re comfortable, you can share your own pronouns.”

Yet another illustration showed two characters telling a girl about different pronouns like “they/them.” “I’m Alex! Mine are they/them too! I feel seen,” one character says, using the meaningless babble of leftists.

The Cartoon Network also linked to materials from National Black Justice Coalition that  seek to change language as a preventative for violence. This despite a black hip-hop culture that has glorified crime and violence for decades.

“LANGUAGE IS OFTEN A REFLECTION OF CULTURE, and when unchecked, can be used to perpetuate violence and oppression,” said the materials. “Words have the power to reinforce stereotypes, marginalize the most vulnerable among us, and support harmful ideas about race, gender, sexual orientation and gender identity, socioeconomic status, and other factors. Language also has the power to be a revolutionary tool in dismantling existing power structures.”

Oregon welcomes terminally ill patients from out of state to come...