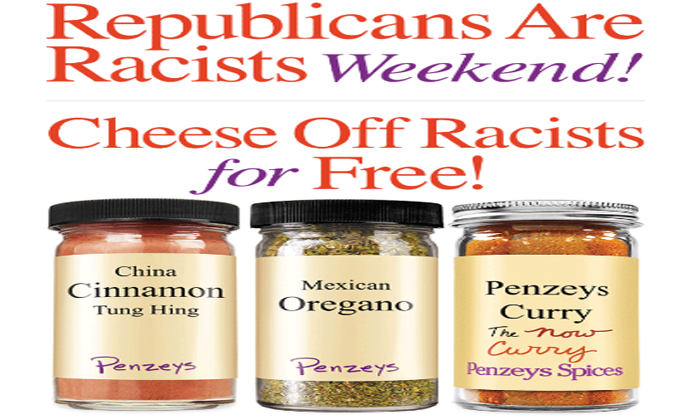 Was it a marketing ploy? A leftist’s overzealous call to political action? Or was it actually hatred spiraling out of control into mental illness?

Whatever the motivation, a Wisconsin-based spice company CEO’s email about all Republicans being racist appears to be hurting business. Penzey’s spice company is now begging people to buy gift cards after tens of thousands of customers “canceled” them.

The company is claiming to have lost 40,000 customers, which it called 3 percent of its customer base, which would indicate 1.3 million customers in total.

Penzey’s Spices CEO Bill Penzey thought it would be a great idea to rename Martin Luther King, Jr. Day as “Republicans are racist weekend” in a marketing newsletter to his customer list. The letter stated its goal as angering Republicans in honor of the late civil rights icon.

If the intent was to be humorous or even mildly clever, it missed the mark with its outlandish, inflammatory claims.

“Remember how Republicans, going against a mountain of evidence to the contrary, once again lied and said BLM wasn’t a peaceful movement but instead terrorists inciting violence throughout the country and then raced out to buy a crapload of guns because maybe they were finally going to get their chance to shoot a Black person? What a bunch of racists,” the e-mail read.

In case not everyone was reaching for his wallet just yet, Penzey also claimed that the Republican Party “does everything it can to make it harder for Black people to vote.”

“It certainly wasn’t unexpected,” Penzey wrote, “but if it’s within your means, you picking up a small stack of Gift Cards would help.”

Biden admits that abortion is killing a child, while staffers rush...