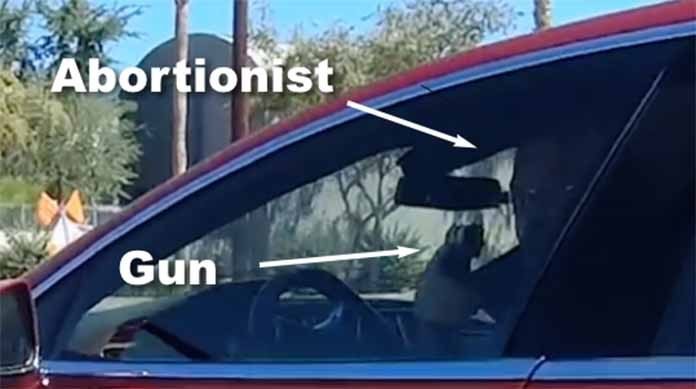 An anti-abortion protest group’s video shows a Phoenix, Ariz. doctor brandishing a gun at group members from his car outside a women’s clinic earlier this month, police said.

Dr. Ronald Yunis, 52, an obstetrician and gynecologist, was booked into the Maricopa County jail and is facing charges of aggravated assault, the Phoenix Police Department said in a Facebook post.

The group Apologia Studios, which says on its website that it presents “Christian media that pulls no punches,” posted the video on its YouTube channel.

The clip shows protesters standing outside the clinic as a man pulls out of the driveway. One of them can be heard identifying the driver as “the abortionist” to the others.

As one protester approaches the car and says, “Dude, you’re a coward,” the doctor can be seen aiming an automatic pistol at the camera as he continues to drive.

Officers responded to the incident and gathered evidence, including a video recorded by one of the people outside the clinic, the Police Department said. An initial report was filed that day, police said.

Conservative journalist stabbed in back during Portland protests

Man opens fire on mother and son over ‘social distancing’

Conservative journalist stabbed in back during Portland protests

Man opens fire on mother and son over ‘social distancing’