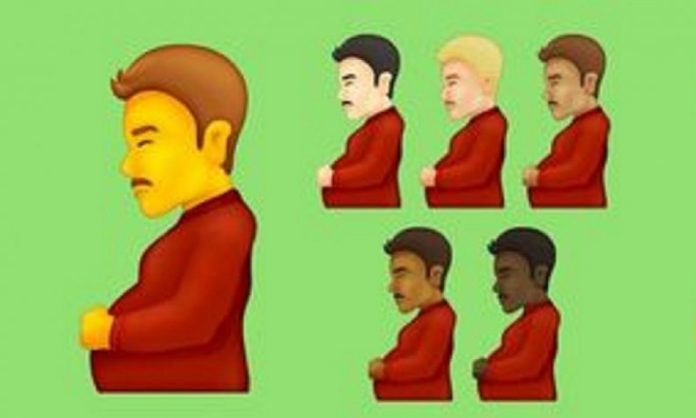 Smartphones will be dumb down next year with the release of new emoji designs that will cater to the growing number of Americans suffering from social and gender dysphoria.

Emojipedia, the central bank of all approved emoji, will release Emoji 14.0 next year.

Included will be a pregnant man, which Emojipedia says will recognize that “pregnancy is possible for some transgender men and non-binary people.”

Emojipedia said it relied upon the British Medical Association for introducing the pregnant man emoji.

“The British Medical Association advises to use ‘pregnant people’ instead of the stereotype term ‘pregnant woman,’” it stated.

Of course, the emoji doesn’t have to represent a pregnant man, Emojipedia added. It could simply represent someone who ate too much for lunch.

“But this proposal goes beyond gender… encoding people emoji with swollen bellies embraces how people repurpose emojis for entirely new uses. Finally, an emoji to denote that uncomfortable feeling after you ate too much at lunch.”

Included in the new release will also be a gender-neutral person wearing a crown in various skin colors.

Most of the new emojis about to be released will have gender-neutral options, though Emojipedia admits that some are still under review, do the uncertainty of what exactly a “gender-neutral approach entails.”

The release of the new emojis was delayed to this year because of the pandemic, though it is unclear how COVID-19 caused the wait.