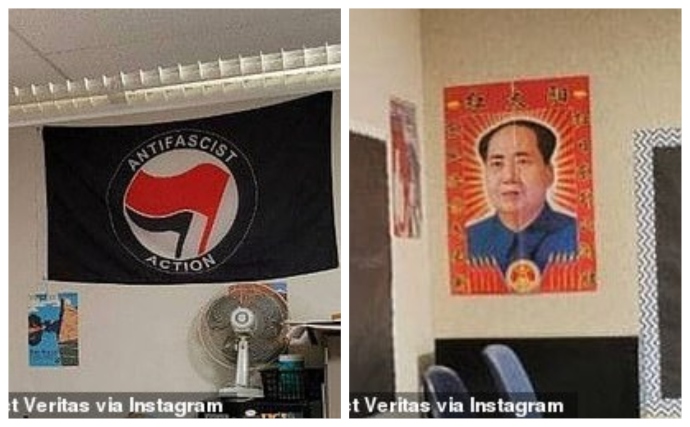 A California teacher who appears to have turned his taxpayer-funded classroom into an indoctrination center for communism – using the names and images of some of the foulest tyrant-thieves in history – will be fired.

The course he was teaching at Inderkum High School in Sacramento? AP Government.

KCRA 3 News got hold of photos showing one of teacher Gabriel Gipe’s graded assignments stamped with the face of North Korea’s Kim Jong-Un, and others that showed posters of Mao and Antifa slogans.

A concerned parent with a child in Gipe’s class sent the photos to the television station. The parent asked to remain anonymous, but described interactions their child had with Gipe in which the student felt singled out and forced to accept rather than think for himself.

The parent said: “He has his platform as the teacher to deliver his message and to say what he wants to say to the class, but when confronted about it in a private conversation, he retracts it. Every student in that class got his message: If something doesn’t directly affect you, your opinion doesn’t (expletive) matter.”

Several teachers and students reported threats following Gipe’s being placed on leave, and the school has upped its security.

A video released by conservative activist group Project Veritas showed Gipe talking on hidden camera about his quest to turn students into political ideologies, and it was this that led the district to suspend him.

“Students were asked to put their photo up on a quad chart based on where their ideology was,” said Chris Evans, superintendent for Natomas Unified School District. “It had, like the Soviet Union Flag up there. It had other flags, forcing students at the age of 17, maybe some 18, to publicly state what their ideology was. That’s completely inappropriate. The teacher’s job is to teach factual information, critical thinking skills to allow the students to work with their families, to make their own decisions and determinations.”