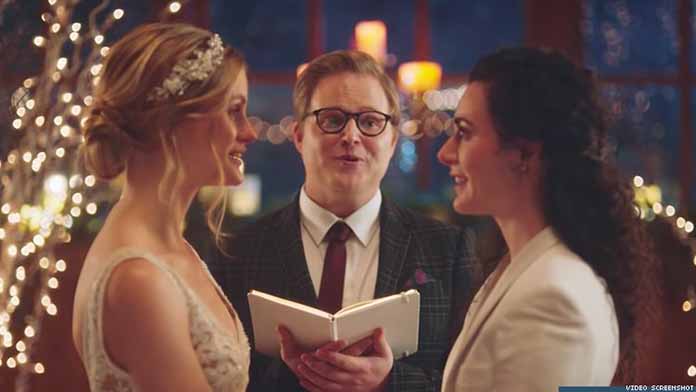 Never let it be said that the Hallmark Channel is a rock of steadiness, secure in its values and immune to the shifting winds of public opinion.

The Hallmark Channel has now restored commercials for a wedding planning site that featured a lesbian couple kissing at the altar, the DailyMail reports.

Hallmark said in a statement on Sunday that the commercials for wedding planning site Zola, one of which showed the two women kissing at the altar on their wedding day, will be restored, days after they were removed following a complaint from conservative group One Million Moms.

A Hallmark spokesperson had previously told The Associated Press that the network pulled the ads because the controversy was creating a distraction.

‘The Crown Media team has been agonizing over this decision as we’ve seen the hurt it has unintentionally caused. Said simply, they believe this was the wrong decision,’ Hallmark Cards CEO Mike Perry said in Sunday’s statement. ‘We are truly sorry for the hurt and disappointment this has caused.’

Hallmark faced bitter criticism on social media over its initial decision to pull the ads.

The hashtag #BoycottHallmark was trending at one point on Twitter, and celebrities like Ellen DeGeneres and also William Shatner of the original Star Trek assailed the decision. ‘Put the commercials back!’ Shatner tweeted. DeGeneres asked: ‘Isn’t it almost 2020?’

Hallmark has obeyed. At least for now.

47% of Republicans predict, ‘Patriotic Americans have to take the law...