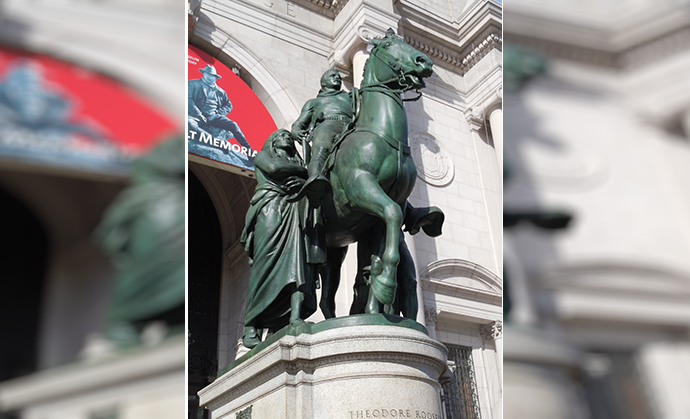 When activists are so incensed by a work of public art that they demand its destruction, watch out. Think “Taliban.”

A group of “woke” academics and artists in a left-wing group called Decolonize This Place hate a statue of Teddy Roosevelt so much that they want it melted down and destroyed rather than simply moved to a presidential library, reports The New York Post.

The “cancelled” statue once stood on the steps of the American Museum of Natural History in New York, but was uninstalled in the dead of night and is now destined for a planned Theodore Roosevelt Presidential Library in Medora, N.D. The bronze figure of the Rough Rider riding a horse and flanked by a black man and a Native American has been condemned as colonialist and racist, and is currently in storage in New York City.

“New Yorkers cannot simply dump their toxic cultural products in other communities,” reads verbiage with an online petition started last month by the academics. “The city should reject the transfer of its undesirable waste elsewhere. In this case, the monument’s bronze content could be melted down or recycled for a better purpose or simply disposed of.”

The petition has drawn a meager 275 signatures since it was posted on Tumblr last month.

In the rash of self-righteous wokeness that spread over the nation last year, New York’s Public Design Commission voted in June to remove the famed statue from the Upper West Side museum, where it had stood since 1940. The proposal to lend it to the Roosevelt library came in November.

The library is to be located near the Theodore Roosevelt National Park, which includes land that once belonged to the Mandan, Hidatsa, and Arikara Nation. Roosevelt owned a ranch in the area.