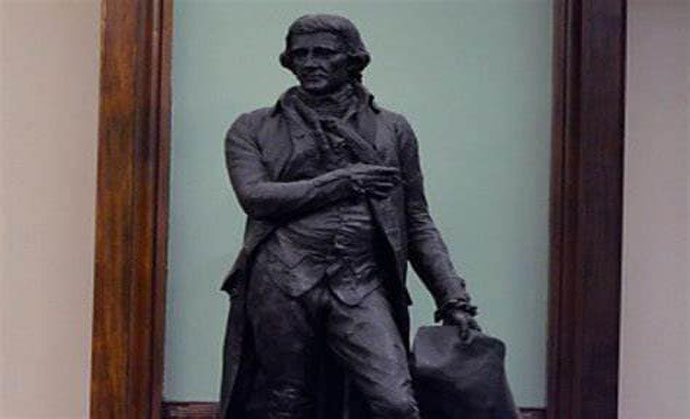 England’s King George III would no doubt be pleased: Thomas Jefferson, writer of the Declaration of Independence, has been canceled by New York City officials.

Except that what got canceled was just a statue, and George himself is nothing but a statue these days.

As part of the left’s ongoing war against images made of stone, plaster or metal, of people they deem unworthy of respect, a century-old figurine of the statesman will be removed from City Hall. It was reportedly making some staff feel “uncomfortable,” and had been a longtime target of the mayor’s activist wife.

The city’s Public Design Commission voted on Oct. 18 to banish the statue before the end of the year, but could not agree on where to put it.

The initial request for removal was made by the Commission on Racial Justice and Reconciliation, which was led by Charlene McCray, outgoing Mayor Bill de Blasio’s wife, after black staff supposedly complained that the statue honors a slave owner.

Republican politicians called it another leftist attempt to rewrite history.

“The de Blasio administration will continue the progressive war on history as he, himself, fades away into a portrait on a City Hall wall,” Councilman Joe Borelli told the New York Post.

“I hope he is at least gone a couple hundred years before someone cancels him.”

The statue has stood resided in the City Hall’s Council chambers since 1834.

Democratic Councilman I. Daneek Miller praised the statue’s expulsion and called it “indefinite.”

“There’s so much about Thomas Jefferson and his own personal writings, memoirs about how he treated his slaves, his family members and things of that nature and how he perceived African Americans and slaves — that they lacked intelligence, that they were not to assimilate into society,” Miller told The Post. “For us to really highlight such an individual is really not who we are as a council.”