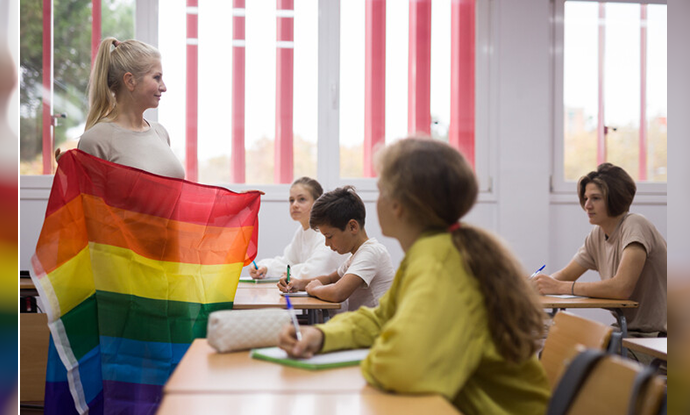 If the stated mission of U.S. public schools were actually “to foster, create and spread homosexual behavior among children,” it’s hard to imagine how schools could be trying harder.

Recent revelations from the Los Angeles Unified School District bear this out, with the large California system teaching kindergartners to “experiment” with pronouns and forcing teachers to have sex secrets with children that are kept from parents.

LAUSD’s sex curriculum is administered by its Human Relations, Diversity, and Equity department. Documents of that office, acquired by Christopher Rufo of City Journal, reveal how LAUSD is pressuring teachers to teach race, gender, and homosexuality to students through conferences, curricula and teacher training programs, The Daily Wire reports.

They also show LAUSD to be following a policy regarding transgender students that lets teachers keep students’ gender identities secret from parents.

A document called “Queer All School Year: LAUSD’s Queer And Trans-Affirming School Calendar” gives guidelines for each month of the school year, from August through June, so that students will regard perversions as normal through constant, regular exposure. Entries on the calendar include “Attend LA Unified School District’s Standing With LGBTQ+ Students Conference” for October, listed on the calendar as “LGBT History Month”; “Post LGBTQ-affirming signs in your office, classroom, and around campus” in December; “Participate in the Black Lives Matter in Schools Week of Action” in February; and “Celebrate Pride Month with literature, art, music, poster campaigns, or lunchtime events” in June.

Rufo also obtained a presentation for the “Standing with LGBTQ+ Students, Staff, and Families” conference on “Best Practices for Affirming LAUSD’s Queer Communities.” Conference classes include such titles as “Welcoming Words & Safe Spaces: Supporting Students Who Are Both Neurodivergent & LGBTQIA+”; “LGBTQ-Inclusive Content and Pedagogy for Elementary and Middle School Classrooms”; “What Your Queer Middle Schooler Wants You to Know”; and “Breaking the Binary in Education.”

Also uncovered was teacher training called “Queering Culture and Race”; the “SOGIE Handbook of Language & Vocabulary,” an extensive glossary of terms related to issues of sexual orientation and gender identity and expression; and course materials from the consulting firm Woke Kindergarten, which encourages kindergartners to experiment with pronouns and adopt non-binary gender identities that “feel good to you.”