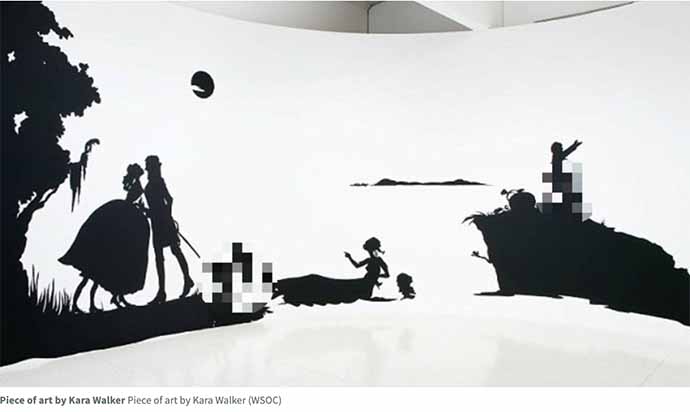 A teacher at Charlotte-Mecklenburg, N.C. middle school gave sixth-grade art students a picture to study that included a graphic image of oral sex going on.

The cartoon-quality artwork is by black artist Kara Walker and depicts her ideas about the slave-holding past of the United States. The image is all silhouette, but it’s clear what is going on in a central part of the picture.

The school principal is promising to take action, reports WSOC Channel 9 in Charlotte.

Parents told the station that the piece of art was too graphic for their sixth-graders at Kennedy Middle School. The district made sure it was no longer on Canvas, the software many public schools now use to distribute lessons and content. Samantha Davis said she can’t believe her daughter and her classmates were asked to study it closely.

“I was shocked,” she said. “I didn’t think I needed to look up what my child was learning in an art class.” Davis said she made the discovery after looking at her daughter’s art-class assignments.

“I don’t find this artist and what she depicts as something age-appropriate for middle school kids to see.”

Davis said she wants to know who OK’d the assignment and why graphic sex was chosen as a topic for sixth-graders.

“To just pull it is nice, that’s great – but it shouldn’t have been there in the first place,” she said.

Kennedy Middle School’s principal went into damage-control mode, sending a message to parents that said: “It was brought to my attention that there were some inappropriate artist images that were inadvertently included in a 6th grade art lesson while the teacher is on maternity leave. I worked with the art teacher to have the pictures removed from the CANVAS platform.”

Part of the statement from Charlotte-Mecklenburg Schools read: “Digital and print resources teachers use within their classroom or on assignments should be vetted and researched before making them available to students.”

Isn’t that simply what teachers have always done?

Police are investigating school board president who gathered SS numbers on...