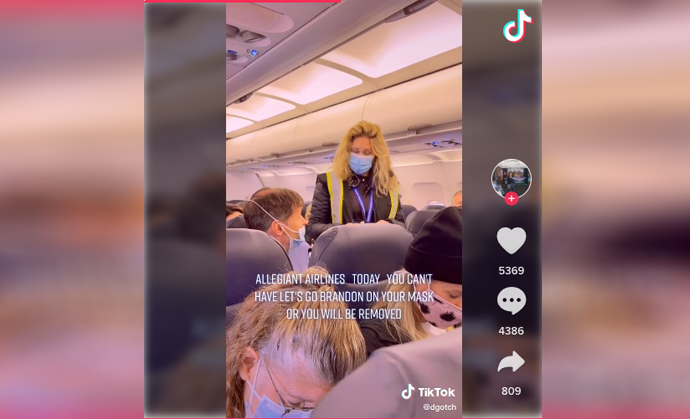 The disunity of the United States under Joe Biden is being summed up in one phrase: “Let’s Go Brandon.”

It was created by a desperate television reporter at a NASCAR race as she talked to driver Brandon Brown while the crowd deafeningly chanted “[Expletive] Joe Biden” behind them in October of 2021.

In the latest incident involving the phrase, a man with the words written on his COVID face mask was apparently removed from an Allegiant Airlines flight. The video of the encounter was posted to Twitter and starts with a man arguing with an Allegiant flight attendant. The crewmember points out the “comment you’ve written on there,” regarding the message on the mask. The video’s caption alleges that the mask bears the “Let’s Go Brandon” phrase.

Allegiant confirmed to FOX Business that the passenger was kicked off the flight (with a full refund), but claimed it was because he was disobeying the flight attendant.

Allegiant has not confirmed whether or not the passenger was unruly or whether the slogan allegedly on his mask was the cause of it. Nor did they say on which of its flights the video was made.

“The video in question depicts part of an incident involving a passenger who failed to comply with repeated crew member requests to adhere to the federal face mask policy,” the airline’s statement to FOX Business said.

“The passenger was removed from the flight and issued a refund for his fare,” it stated. ” … The decision to remove a passenger is never made lightly and is always done with the safety of our passengers and crew in mind.”

In late January an airline passenger headed from Cleveland to Tampa Bay was asked to remove his “Let’s Go Brandon” mask. Earlier the same month, an American Airlines passenger made news by complaining about a pilot whose carry-on bag bore the sticker ridiculing Joe Biden.

In October, a Southwest Airlines pilot reportedly told passengers “Let’s Go Brandon” as he wrapped up an announcement on the plane’s P.A. system on a flight from Houston, Texas to Albuquerque, N.M.

Maskless students accused of ‘willful disobedience’ in Va.; 29 suspended until they comply