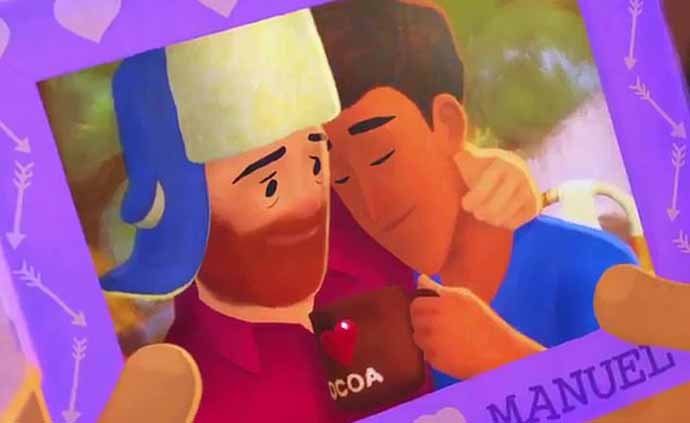 The Disney-owned studio premiered the LGBTQ-themed short on the Disney+ streaming service as part of its more experimental SparkShorts program.

The nine-minute film follows a man named Greg who desperately tries to hide any trace of his boyfriend Manuel ahead of a visit from his parents.

Cornavirus! How God is Crushing the Liberal Left and The Godless

Aided by cat and dog fairy god-pets, Greg switches bodies with his dog, Jim, with the help of a magic dog collar. Much of the action centers on attempts trying to distract Greg’s mother (Bernadette Sullivan) from discovering a framed photograph of the couple hugging.

Greg, who has a thick red beard and wears an ushanka earflap hat, tries to talk himself into coming out to his parents in the opening of the clip.

‘Just look them in the eyes and say, “Mom, Dad, I’m—’ he says before he’s interrupted by his parents ringing the doorbell.

However, the streamer’s synopsis avoids using the word ‘gay’ and or even mentioning Greg’s sexuality, and the word is also never uttered in the short, though he does share a kiss with his boyfriend.

“These films are unlike anything we’ve ever done at Pixar, providing an opportunity to unlock the potential of individual artists and their inventive filmmaking approaches on a smaller scale than our normal fare,” a Pixar Animations Studios statement said.