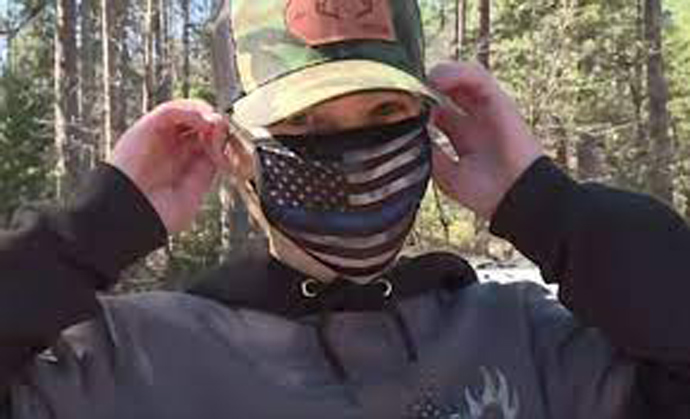 While students are being suspended in Virginia for not wearing masks, in California a student was berated by a teacher for wearing the “wrong” one.

The substitute teacher in California got himself recorded on video berating a student for wearing a non-obscene, inoffensive flag design in support of police.

Lucas Lillar, a 13-year-old in the eighth grade at Lyman Gilmore Middle School near Sacramento, appears in a video captured by another student as the unidentified substitute teacher calls him out in front of the class for wearing a Blue Lives Matter American flag mask, which features a blue line added to the stars and stripes.

Lucas later showed the video to his father and stepmother, who are both police officers.

“That’s not the American flag,” the teacher says, correctly, but then adds: “That’s the new confederacy flag.” The teacher can then be heard yelling while Lucas tries to defend himself on Jan. 31.

“It”s the thin blue line,” the teen tries to explain.

“No, it’s black, white with some blue line in it,” the teacher accuses.

“Yeah, but it’s not American!” the substitute teacher argues back, as if a school rule and not his own tastes had been violated.

The substitute teacher has been let go and will not be teaching any further classes at the school, according to DailyMail.com.

A number of high-profile killings of police officers have occurred recently, all across the nation. In California, LAPD officer Fernando Arroyo was shot dead during an armed robbery last month. New York City has been in mourning for two officers killed while responding to a domestic violence call.

The Fraternal Order of Police reports that violence against law enforcement is spiraling, with 27 officers wounded and four killed in shootings in January 2022.

“These topics need to be left at the door,” said Lucas’ stepmother, Amanda McCallum, to CBS News. “The school is meant to educate our children in a safe environment and I don”t feel like this was a safe environment, but it needs to be. We are entrusting these people of authority, these teachers with our children.”

“We are in a time where we are so divided that we need to learn to be kind and respect each other.”