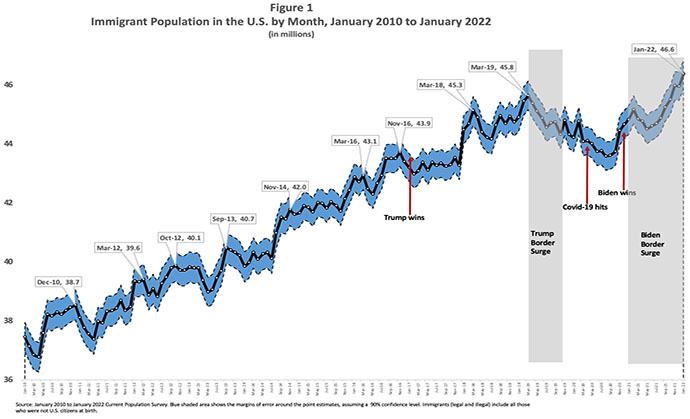 To the surprise of no one, illegal immigrants are flooding into the United States in record numbers as the government, under titular president Joe Biden, strives to populate America with non-Americans.

Illegal immigrants who crossed the U.S.-Mexico border under Biden’s policies have driven the foreign-born population of the U.S.S. to a record high. A recent analysis of census data discussed in the Washington Examiner found 46.6 million legal and illegal foreign-born immigrants in the country, up 1.6 million over 2021.

The Center for Immigration Studies analysis revealed also that the foreign-born population is now 14.2 percent of all people in the United States who were counted by the census, the highest number in just over a century.

“If present trends continue, the immigrant share is likely to surpass the all-time highs reached in 1890 (14.8 percent) and 1910 (14.7 percent) in the next few years,” said the report’s authors, Steven Camarota and Karen Zeigler.

Some 2 million were intercepted by U.S. border officials last year, but many slipped into the United States undetected.

President Donald Trump’s much-vaunted border wall and policies to throttle entries and apeed up deportations have been dismantled by the Biden administration. The report cites that shift as a primary reason for the new record number of foreign-born people in the U.S.

I“The large surge of illegal immigrants at the southern border caused in part by the perception, based on his campaign promises, that President Biden would curtail immigration enforcement explains at least some of the growth in the immigrant population we are seeing,” the report states.

Federal officials said the surge started a month before Biden took office. The CIS report added, “The immigrant population began to grow, relative to the same month in the prior year, in December 2020 and has continued to increase every month thereafter.”

Several states are setting up challenges to Biden’s pro-immigrant policies.

School investigates after Muslims told not to pray in computer lab