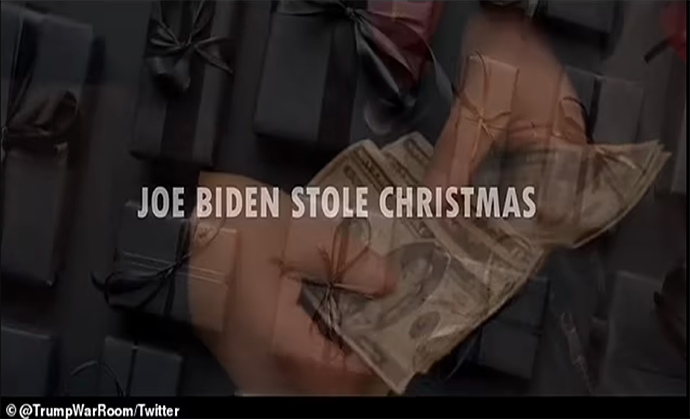 President Donald Trump is continuing to pummel Joe Biden, who took his place in the White House in January after a highly irregular presidential election that raised countless accusations of fraud, releasing a new ad on Dec. 5 that declares: “Joe Biden stole Christmas.”

Trump is also warning that Biden, the Democratic Party and their allies in Washington and in the media are driving the U.S. government to a point at which its course cannot be corrected and the nation as founded will be lost, FOX News reports.

Trump told conservative commentator Mark Levin that the Biden administration has already violated a previous executive order he signed banning Critical Race Theory, which cloaks Marxism in a guise of anti-white racism with which no one dares to disagree, from the federal government.

“President Obama was very divisive, but people were more quiet about it,” Trump said. “They didn’t want to insult him, but he was very divisive. But the Biden administration is far worse. In fact, I noticed the other day where Obama said ‘this is very dangerous’; all of these — you know, what they’ve done. It’s too much for him,” he said.

“But when they look at his top economic people are looking at this inflation, and they’re seeing these bills that are being passed for trillions and trillions of dollars where it’s like throwing money out the window,” Trump continued, alluding to how Obama-era officeholders like Treasury Secretary Lawrence Summers have given warnings about current Democratic officeholders’ actions.

“These are Obama people telling Biden people ‘you can’t do this, -‘ but they push forward anyway. Let’s see what happens.”

Trump said he was glad to see Virginia Gov.-elect Glenn Youngkin preparing to take office in Richmond after upsetting Clinton money man Terry McAuliffe, revealing that Youngkin called him after his win to thank him for his support:

“The ‘MAGA’ people came out in a force far greater than anybody thought possible,” he said.

Trump said Youngkin’s win should be a wake-up call for the left, and argued that the nation must return to policies of secure borders, free markets, a fair press, and more polcies he said Biden has abandoned.

Outrage over Christmas card saying ‘Mary slept with someone else’

Atheism and Islam on the Rise in UK. Christianity Suffers ‘Dramatic...